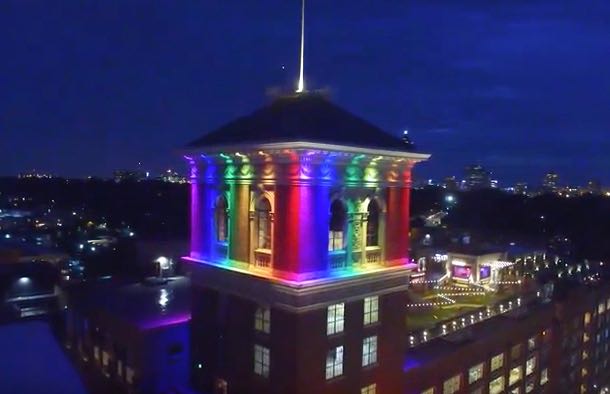 Atlanta doesn't have its rainbow crosswalks just yet. So to help quench your gay pride thirst, Ponce City Market has doused its tower in rainbow lights. Now that's how you say Happy Pride!

The massive mixed-use development at the intersection of the Beltline and Ponce de Leon Avenue showcases the rainbow-themed display nightly from 8:30 p.m. to midnight. It started June 21 and will run through Friday.

If you can't make it by to see the display in person, Ponce City Market has you covered. They produced a 20-second video that opens with “We're Lit Up In Color And Full Of Pride” against an aerial shot of the development set to George Michael's “Freedom!” Because gay.

And about those rainbow crosswalks: Mayor Kasim Reed pledged to install them permanently at the intersection of 10 Street and Piedmont Avenue. City officials haven't provided a firm date for the work, but said sometime in the coming weeks.