Pols in Pride parade get creative to snag votes 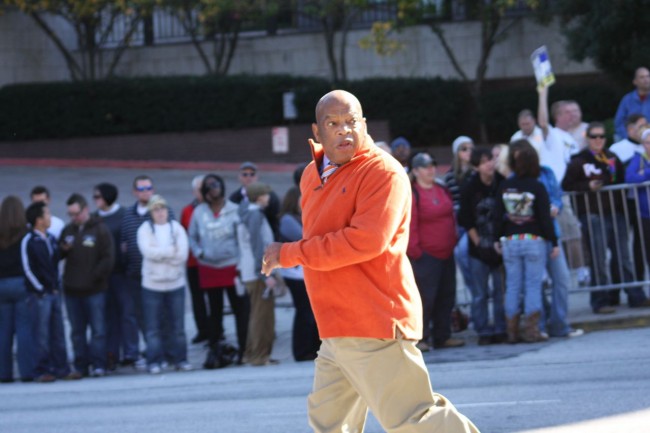 Some walked, others rode in convertibles. At least one ran. But there they were stumping for LGBT votes. And we’ve got awards for the most creative use of props by politicians and candidates in the Atlanta Pride parade.

Even Melissa Carter, the lesbian radio personality from Q100, got in on the games by dressing as a rabbit holding a sign that read “Vote Democrat.”

Nearly 20 candidates and elected officials were among the more than 165 entries into the annual parade on Sunday. While some were pretty ordinary or conservative in their approach, others worked hard to make an impact during the Pride-O-Ween festivities. For those we have these awards:

Best Use of Their Own Skin: Mayoral candidate Lisa Borders (photo) clearly worked hard to sway lesbians in her favor by flashing some midriff. Borders, already dressed in a jogging suit that would appeal to active women, unzipped the jacket and showed a little flesh as the parade progressed. Thankfully, this pol has no muffin top.

Best Use of Someone Else’s Skin: Liz Coyle, one of six candidates seeking the District 6 post on the Atlanta City Council. Though she’s straight, Coyle gets the flesh factor when it comes to attracting the gay vote. She had a shirtless and sexy cowboy with low-slung jeans in her parade pack. Coyle also gets Best Use of Someone Else’s Dress for having a dress-clad male supporter on her float.

Runner-up goes to competitor Alex Wan. Though he didn’t have any shirtless supporters, his parade crew was stacked with some hotties.

Most Athletic: Civil Rights icon and U.S. Rep. John Lewis (top photo), who’s 69, is a bundle of energy. Wearing a long-sleeve shirt, tie and orange sweater, Lewis at one point jumped off his convertible and bolted through the corner of 10th Street and Peachtree to the delight of the crowd.

Wigs Aplenty: Bahareh Azizi, also seeking the District 6 post, knows the gays love their wigs. So she had a couple of wig-wearing supporters with her on Sunday, including a rainbow-clad one as her driver (photo). But we’re not sure the drag queen vote is enough to deliver victory on Election Day.

Screw the Driver: Kyle Keyser, the gay grassroots candidate seeking the mayor’s seat, at one point hopped off the back seat and took the wheel of his car. In a low-budget campaign, nothing is beneath this candidate. We commend him for wearing jeans, too.

Man’s Best Friend: School board candidate Charlie Stadtlander displayed his family values while also making a play for dog lovers. He rode in the parade with his partner and their pup at his side.

Best Use of Rainbow Scrunchy: Carla Smith (photo), the incumbent District 1 rep on the Atlanta City Council. Her car already festooned with rainbow flags, Smith was adorned with a rainbow scrunchy on each wrist.

Best Use of Trophy Gay: Mayoral hopeful Kasim Reed had Karla Drenner in tow during the parade. Drenner, the only openly gay member of the state House, endorsed Reed earlier this year, which apparently meant she had to spend a perfectly beautiful Sunday afternoon helping him schlep for votes.

Smartest Suit: Mary Norwood, already labeled a Republican by her mayoral rivals, dressed like one in a conservative, yet smart-looking pants suit. Kudos to matching the blue jacket with her campaign paraphernalia.

Hotty Toddy: That goes to Amir Farokhi (photo), a straight but not narrow candidate for Post 2 At-Large on the Atlanta City Council. We’re shallow, to be sure, and he’s the pol that gets our vote as the best looking candidate in the parade.

Check out the photos of the politicians and candidates in our Project Q Atlanta photo album. We’ve pulled out the pols to make our award winners easy to spot.