Politicians come out in force for Atlanta Pride parade 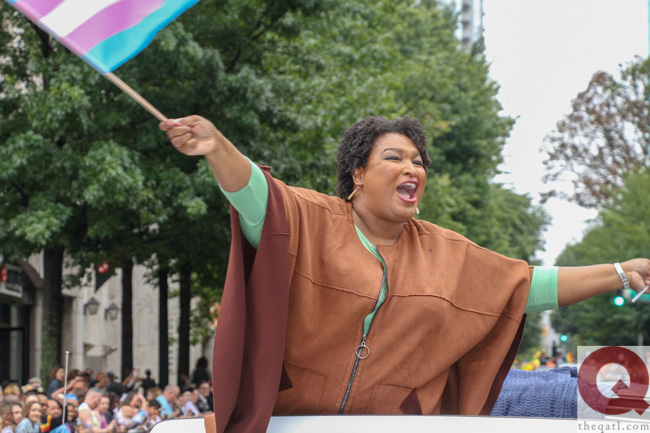 Stacey Abrams, U.S. Rep. John Lewis and Atlanta Mayor Keisha Lance Bottoms topped a lineup of about 35 elected officials and candidates who marched in the Atlanta Pride parade on Sunday.

Participation in the event has turned into a necessity for progressive politicians in Georgia, especially as elections near in 2020 for two U.S. Senate seats, the state's U.S. House seats, the entire Georgia legislature and a slew of municipal races.

Abrams (top photo), the former Georgia House minority leader who ran for governor in 2018, was among 12 grand marshals for this year’s parade. She noted the large political lineup in a speech to the crowd before the event, which included more than 300 entries and lasted for hours.

“I’m proud of the fact that this year we’ve got a lot of politicians who realize that they need to show up and show out and show their support,” she said. “Because in 2018, you voted for change. We didn’t quite make it across the finish line, but that just means we’ve got a little more work to do. We can do it.”

LGBTQ Georgia’s political clout is being noticed and it’s keeping anti-LGBTQ legislation from passing, according to Abrams.

Abrams decried the state’s high HIV rates and the refusal by state lawmakers to expand Medicaid.

“We’re a state that has refused to take responsibility and provide protections to communities,” she said. “And unfortunately, we live in a nation where transgender men and women face assault every day.”

Abrams has ruled out running for either of the state's U.S. Senate seats. She founded the voting rights group Fair Fight and the group Fair Count to ensure that hard-to-count populations are included in the 2020 U.S. Census.

“In 2020, we not only have elections to win, we have to make sure that the LGBTQ community is counted in the 2020 census,” she said. “We will lose access to resources, but if we show up, if we do our jobs, no one will ever be able to deny the powerful force that is … the LGBTQ community in Georgia.”

Lewis, a perennial parade favorite, called on LGBTQ Georgians to vote in upcoming elections during a pre-parade speech.

“We’ve got to go out and vote like we’ve never voted before,” he said.” We’ve got to do it for our brothers and our sisters and our mothers and our fathers — for everybody. We all live in the same house — not just the American house but the world house.”

“And it doesn’t matter whether you’re gay or your straight. We are one people, one family. And never ever forget it. We’ve got to save our country, save the Constitution, save democracy and create an America at peace with itself. The world is watching us,” Lewis added.

Other candidates and elected officials who participated in the parade:

View more photos from the parade.