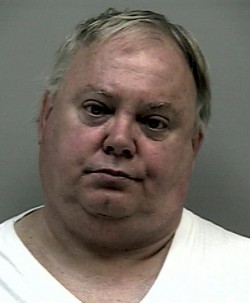 Joseph Raymond Zeock was arrested early Tuesday in Gwinnett County, a week after he allegedly bound, gagged and set on fire a 17-year-old male while the two had sex in a motel, police said.

Zeock, 61, of Woodstock was arrested in a motel on Medlock Bridge Road on charges of aggravated battery, cruelty to children 1st degree, false imprisonment and solicitation of sodomy. He was booked into the Gwinnett jail about 4:30 a.m., according to the Atlanta Journal-Constitution.

Woodstock police charged Zeock (photo) in the incident, which took place overnight on July 10-11 at a hotel on Woodpark Boulevard in Woodstock, police said. Authorities asked for the public’s help in locating Zeock after talking with the victim on July 12 at Grady Memorial Hospital.

“The victim stated that Zeock had promised him money in return for certain acts. During one of these acts, the victim was bound, gagged, and set on fire,” Woodstock police spokesperson Brittany Duncan said in the alert.

Zeock is being held without bond.