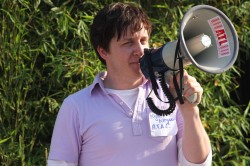 Top commanders from the Atlanta Police Department will sit with leaders from a handful of gay and grassroots groups during a 90-minute forum Monday about the recent raid at the Eagle.

Atlantans Together Against Crime, which is co-hosting the community forum with Virginia Highland Church, late Friday released a line-up of participants to the event the group first announced on Wednesday.

The forum will also include representatives from Georgia Equality, Atlanta Stonewall Democrats, In the Life Atlanta, ATAC and Building Locally to Organize for Community Safety.

The Sept. 10 raid resulted in eight arrests, two protests, calls from elected officials and political candidates for an investigation into police tactics and a public flap over grand marshals for the upcoming Pride parade.

“I know The Eagle raid is a sensitive topic for many in the gay community, including myself,” says Kyle Keyser (photo), the founder of ATAC. “I want answers like many others. I’m hoping this is an opportunity to not only get some clarity on APD procedures and protocols but also one where, as a community, we rise to the occasion. It’s my hope that the forum can begin some healing as we try to understand and, ultimately, work toward a better, symbiotic relationship between the LGBT community and the APD.”

Keyser, the only gay candidate for Atlanta mayor, was one of the first public figures to speak out about the raid.