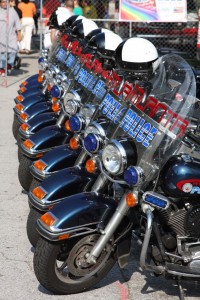 The Atlanta Police Department, stung by publicity over its tactics in raiding the Eagle last month, seemed to get it right Saturday when they busted a strip club. Meaning, this time, officers actually found illegal activity.

Officers and the department’s license and permits unit joined with the Red Dog Unit — the unit criticized for heavy-handed tactics during the Sept. 10 raid at the Eagle — and Fulton County prosecutors to raid the 24K Club at 2284 Cheshire Bridge Road Saturday morning. Some 29 people were arrested for drug sales and other alleged illegal activity.

For five months, undercover officers investigated the establishment, which helped them to obtain the warrant, said police officials.

In that time, officers purchased drugs from employees and others there.

What stands out the 24K Club raid is that officers actually scored drug buys before they stormed the strip club. When officers raided the Eagle, they visited the bar on a couple of occasions but never found illegal drugs despite an anonymous complaint that kicked off an undercover investigation.

What they did find, according to their investigative reports, was alleged sexual activity though when eight people were arrested during the raid, none were charged with anything but violations of city ordinances.

What’s also interesting about the weekend raid, when looked at in light of the Eagle incident, is that police had prosecutors along for the ride, something lacking when they raided the Eagle. Attorneys on site could have prevented what some patrons — and later, attorneys — allege was mistreatment and unconstitutional infringements on their rights.

The Eagle raid resulted in eight arrests, two protests, calls from elected officials and political candidates for an investigation into police tactics, a public forum with police and LGBT activists and a public flap over grand marshals for the upcoming Pride parade.

Has the ensuing very public flap already pushed police to modify their tactics?