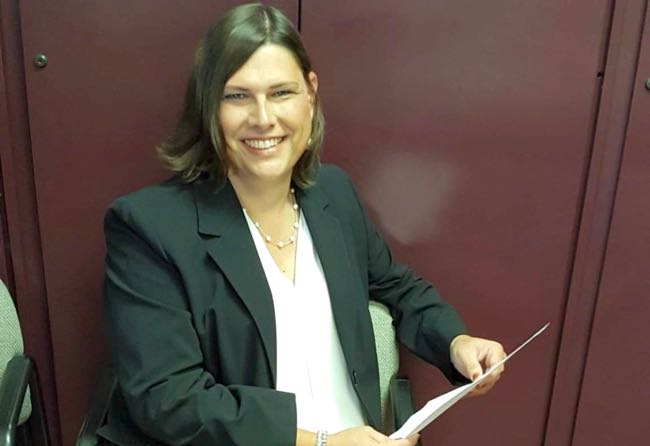 A transgender police officer in Warner Robins is threatening a lawsuit against Houston County for not covering her gender dysphoria treatment.

Sgt. Anna Lange, a criminal investigator with the Houston County Sheriff’s Office, said county officials have ignored her attorney’s request to meet and talk about covering the treatment.

“The Sheriff’s Office has treated me with respect and values my 12 years of service,” said Lange (top photo) in a press release. “But the county singles out and excludes the doctor-recommended care that I need simply because I’m transgender.”

“That sends a clear message that my service as a public safety officer is not wanted or valued in Houston County,” she added.

Lange and her attorney, Noah Lewis of Transcend Legal, plan on making public comments about the matter during the county’s Board of Commissioners meeting on Tuesday.

Lange came out as female and transitioned on the job in 2017. She received support from Sheriff Cullen Talton and her colleagues, according to the AJC.

She said she was initially told that her treatments for gender dysphoria would be covered, so in November 2017, she consulted with a surgeon. But she received a letter saying preauthorization for the surgery was denied due to a carve-out in her healthcare plan with Anthem Blue Cross Blue Shield. She missed a Jan. 31, 2019 surgery date.

Lewis said he wrote to the Board of Commissioners and County Attorney Tom Hall on Jan. 16 requesting that the exclusion be removed. He did not receive a response. Hall did not immediately respond to Project Q Atlanta’s questions about the matter.

Lewis said Anthem Blue Cross Blue Shield provided a template plan to the county that includes the transgender care exclusion. He said the county chose to adopt the plan with the carve-out, and that it has the power to change the terms of the plan and remove it.

“We are hopeful that this can be resolved without a lawsuit,” said Lewis in a press release. “When we inform private employers that it is unlawful to exclude transgender-related care, they almost always voluntarily remove the exclusion.”

“The Board has the opportunity to treat all of its employees equally and vote to end this unfair treatment of county employees and their families,” he added.

In a separate case, Transcend Legal represents Skyler Jay, a University of Georgia employee who filed a federal lawsuit against the school for not covering his gender confirmation surgery.