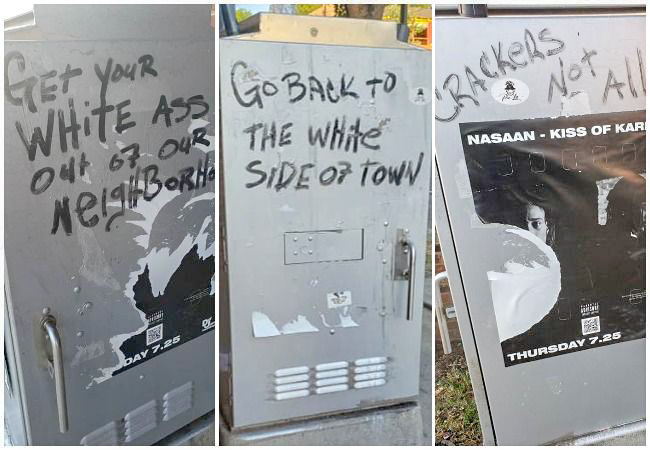 The Atlanta Police Department’s Homeland Security Unit has opened an investigation into anti-white and anti-gay graffiti found at a popular intersection.

The incident has ensnared a candidate for the state House of Representatives, who believes the perpetrator might be a stalker who is targeting her because he thinks she’s gay, according to Atlanta Progressive News.

The graffiti on silver utility boxes (photo) at the corner of Martin Luther King Drive and Joseph E. Lowery Boulevard had three messages: “Get your white ass out of our neighborhood,” “Go back to the white side of town” and “Crackers not allowed,” according to APN. The graffiti was reportedly up for at least two weeks.

APN also observed graffiti at the same intersection that said, “Fuck white people and faggots.” But the graffiti is no longer there, and APN did not take photos, according to News Editor Matthew Cardinale.

The incident is being investigated as a potential bias crime, according to an Atlanta police spokesperson.

“We were advised there had been some anti-white and anti-gay graffiti that was spray painted on structures at the corner of Martin Luther King Jr. and Joseph E. Lowery boulevards in northwest Atlanta,” Senior Police Officer TaSheena Brown told Project Q Atlanta. “We had our Homeland Security Unit open an investigation for potential bias crimes. We were not able to document any anti-gay slurs spray painted at the location, but did note the anti-white sentiments.”

Investigators are working to identify the perpetrators, and no arrests have been made, according to Brown.

Mesha Mainor, a candidate for state House District 56, told APN she believes a stalker may have targeted her with the graffiti.

“There is an ongoing investigation against someone that has been stalking me, and the person has also stated that he believed me to be gay, although not true,” Mainor said.

“And since this time, he has begun a campaign directed to hate speech about gay people, which I would be included in since he thinks I’m gay.  When it was brought to my attention that he was starting a Youtube channel and specifically talking about the Intersection of MLK and Lowery, which he refers to as Ashby [its former name],” Mainor said.

“Stay woke. This is why we need real leadership to stand up to the gay confederacy. MAKE ATLANTA STRAIGHT AGAIN!!” Monson wrote, according to APN.

Monson added that “the gay Confederates” are gentrifying the neighborhood and using the LGBTQ community as a “weapon of mass destruction of the black community,” according to APN. Monson said the Victory Fund and the Log Cabin Republicans are “funding this attack.”

The posts have since been deleted, and Monson did not respond to Project Q’s questions about them.

The intersection is in Atlanta City Councilmember Antonio Brown’s district. Brown, who is the council’s first-ever black LGBTQ member, told APN he would fix the issue.