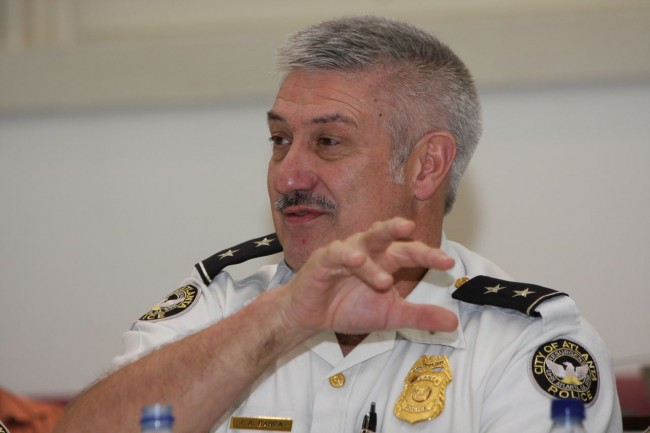 A top commander of the Atlanta Police Department defended the agency’s use of the controversial Red Dog unit during bar raids, but said officers who discriminate against anyone will be fired.

The comments from Deputy Chief Carlos Banda (top photo) came Monday during a two-hour forum in the wake of the police department’s Sept. 10 raid of the Atlanta Eagle, a popular gay bar on Ponce. The event marked the first time LGBT activists, people arrested in the raid and police came together to discuss the incident.

A crowd of about 80 people, including nearly two-dozen uniformed police officers, sat through the forum at Virginia Highland Church. Top commanders from the police department, gay officers and leaders from LGBT groups joined together for a panel discussion organized by Kyle Keyser, a gay candidate for mayor and the founder of Atlantans Together Against Crime. 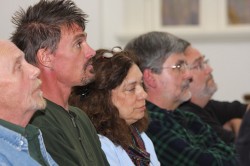 Despite being pressed by questions from the audience, police officials veered away from discussing specifics of the Sept. 10 raid. The incident resulted in eight arrests, two protests, calls from elected officials and political candidates for an investigation into police tactics and a public flap over grand marshals for the upcoming Pride parade.

The department’s internal affairs unit is investigating several complaints lodged by patrons at the bar and those arrested during the raid.

Banda said the Red Dog unit, which was the target of most of the complaints of mistreatment during the Eagle raid, was formed nearly 20 years ago to address gang activity and illegal drug use. Now the specialized unit assists in many undercover operations when arrests are made, he says.

“It’s always best to have uniformed officers to go in and do the actual take down to ensure safety. The reason Red Dog is used in a lot of different occasion is because we don’t have to take people out of zone cars and regular beat officers. They are specially trained to do things like this. The procedures are very strict and they go bam, bam, bam by the numbers,” Banda said. “Sometimes the tactics are a little more aggressive than we would see on regular patrol because of the enforcement problems we are given.” 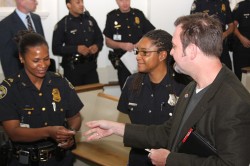 Patrons at the bar during the Sept. 10 raid complained that they were handcuffed and forced to lay face down on the floor for up to an hour and that officers used profanity and racial and anti-gay slurs.

Banda said that if the department’s internal investigation into the raid shows officers acted inappropriately, they will be disciplined.

“Police officers have a solemn vow to serve and protect the city. When you have somebody who does not do that, it is a black mark against the whole police department,” Banda said.

Eagle owner: ‘Get this behind us’

Banda repeatedly asked that the gay men and lesbians in the audience work together with the police department, a call echoed by Richard Ramey, a co-owner of the Eagle.

“One of the first things we need to do, and I hope that our community knows how serious this is, is that we need to come together,” Ramey said.

“That’s including our entire community and our police force. APD protects all of us and we need to do everything in our power to try to get this behind us and hope something positive comes from this. We as a community don’t need to be known as a bad place for gay people. We deed some honest answers to the questions we have. If we have honest answers, I think we can get behind this and go forward in our community,” he added.

Banda said that when Chief Richard Pennington, who was not present at the forum Monday, was hired as the city’s top cop in 2002 that he held quarterly meetings with LGBT activists and leaders. Banda pledged to work with Officer Dani Lee Harris, the agency’s LGBT liaison, to return to those meetings.

“In reality, we should have kept on doing those so the contact would stay close between the two. We are going to start back if you all wish; we hope you do. We do like having quarterly meetings so we can talk all the time, so we can make sure everybody is on the same page about everything we can be or least understand each other and know the why’s and where’s of what is going on,” Banda said.

Jeff Graham, executive director of Georgia Equality, said that although Atlanta’s gay residents have enjoyed a healthy relationship with police in the last several years, the Eagle incident renewed suspicions that still run deep thanks to decades of being “systematically harassed and intimidated” through bar raids.

“It was not that uncommon, in fact it was extremely common, through most of the 20th century that vice teams were used to specifically target gay men, lesbians and the transgendered community,” Graham said.

“People lost their jobs, people lost their families. Too many people lost their lives due to suicide. While we have had a very good track record of working with the Atlanta police department over the last decade, I hope that everyone realizes the seriousness of this because the intimidation, the fear, the harassment has been very real and the result on our community has been equally dire,” he added.

Raymond Duke, president of In the Life Atlanta, said often LGBT people who are minorities are hesitant to complain of abusive police behavior.

“We need to make sure that we recognize and call things as they are and deal with reality that people are discriminated against, people are abused, people are mistreated,” Duke said. “And often times it is the people in power that put those things in place and so people don’t challenge for fear of retaliation or what might happen.” 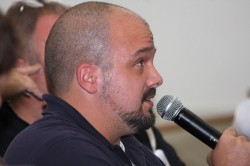 Banda also defended the department’s approach to investigating citizen complaints. Police say two anonymous complaints of alleged sex and drug use inside the Eagle prompted the months-long investigation that culminated in the Sept. 10 raid. The Eagle’s owners have denied that drug use takes place at the bar and the eight arrests were on city ordinance violations, not drug or sex-related charges.

“Should we be doing operations like that? As long as citizens make complaints, we have to look into it. We really don’t have a choice. Whether we like the law or not, we have to enforce the law equally and that is the most important part – equally,” Banda said.

Banda also said officers follow department policy in conducting identification checks of people detained in raids such as the Eagle. In the wake of the raid, some attorneys – including one for the eight men who were arrested – challenged the constitutionality of conducting such checks, arguing the officers lack probable cause.

“Why do we do criminal history checks when we hit an establishment,” Banda asked. “There is a very simple reason: There have been too many times, unfortunately, where we have let murderers go, we have let robbers go because we didn’t check their IDs in an establishment. At this point that is the policy.”