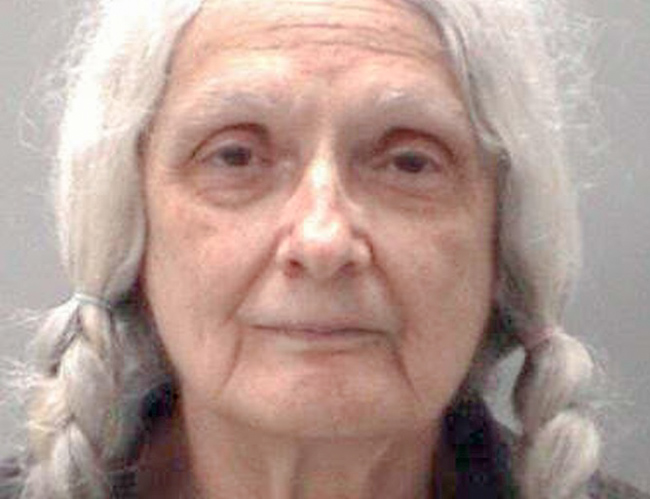 Longtime LGBTQ activist Lorraine Fontana was one of 19 people arrested in a wave of Atlanta protests that demanded action on climate issues.

The protests on Sept. 27 — organized by climate action group Extinction Rebellion Atlanta — began in Buckhead and later moved to Midtown.

“Their idea was to go to some busy intersection in Atlanta and make a point by really messing up the traffic and having people say, ‘What the hell is this?’ and, ‘Who are you?,’” she told Project Q Atlanta.

Fontana (photo), who was a 2013 Atlanta Pride grand marshal, was part of a group that blocked roads at the intersection of 10th and Peachtree. The 72-year-old activist sat in a chair in the road alongside another activist, Daniel Hanley.

“We sat down together there and as the cops started coming, they came over and said, ‘You have to get up’ and we said no,” she said.

Police restrained her wrists with zip ties and arrested her. Fontana can be seen in a Facebook video of the arrests (below) giving a thumbs up to other protesters.

The protesters charged with wearing a mask were taken to Fulton County Jail. The others arrested, including Fontana, were taken to the Atlanta City Detention Center, according to Carlos Campos, public affairs director for Atlanta police.

Fontana was charged with pedestrian on or along a roadway and released on a signature bond later that day.

“The Atlanta police were very nice, they weren’t being nasty to us,” she said. “We just had to follow the rules. Then we got processed.”

The protests took place in part to get the City of Atlanta to move up its timetable on a series of climate change policies, according to Fontana. The Atlanta City Council adopted a plan in March that included using more renewable power, boosting energy inefficiency and buying renewable energy credits, according to NPR.

“Their timetable is much too long distance. You have to step up immediately and do something, which is more uncomfortable,” Fontana said. “One of the next steps is working with the city council and neighborhood groups to change those dates and make it happen a lot faster. This is what we all need to do to get it stopped before it’s way too late to save a lot of land and a lot people.”

Fontana said the arrest process was “amazingly easy” compared to her prior arrests during acts of civil disobedience. She was arrested four times for preventing or disrupting lawful meetings, gatherings or processions in 2014 and 2015, according to the Fulton County Sheriff’s Office. Those arrests were during protests against stand-your-ground laws, voter suppression, anti-LGBTQ “religious freedom” bills and the state’s decision not to expand Medicaid, according to Fontana.

Fontana was back at another protest on Monday, this time to fight a Georgia Power rate hike outside the Georgia Public Service Commission’s headquarters in Downtown Atlanta.