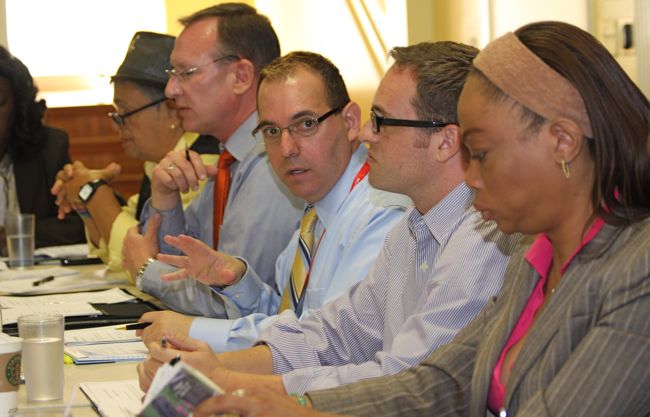 The Atlanta Police Department’s LGBT advisory board (photo) is scheduled to receive reports on two recent gay events as well as hear from the head of APD’s internal affairs unit, Major Elder Dancy, during its meeting on Monday.

The panel released its agenda ahead of its Oct. 18 meeting, which is open to the public. It includes updates on Sunday’s Atlanta AIDS Walk & 5K Run and the recent Atlanta Pride Festival. The group’s chair, longtime LGBT activist Glen Paul Freedman, has also asked the police department for updates on the internal investigation into the Eagle raid and the status of Officer Dani Lee Harris.

The Eagle raid, which took place in September 2009, prompted an internal investigation by police that is still ongoing as well as a federal lawsuit by several patrons of the bar. Earlier this month, attorneys who filed the lawsuit accused the city of destroying evidence in the case and asked a federal judge to sanction the city and police department.

Harris, the department’s former LGBT liaison, was placed on leave in April after filing a complaint with APD’s internal affairs unit alleging that a civilian employee used abusive language and discriminated against her based on gender identity and sexual orientation. Police officials have said Harris’ three gran mal seizures since December prompted her leave.

Last month, APD added a page to its website for the advisory board that includes meeting minutes and agendas, as well as contact information for panel members. The meeting on Tuesday begins at 7 p.m. and includes a portion for public comments.