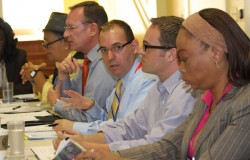 The LGBT advisory board for the Atlanta Police Department meets on Monday for its third session as it continues to move through the mundane tasks of organizing itself and settling on its mission.

The nine-member panel meets at 7 p.m. in Committee Room 2 at City Hall in downtown Atlanta. On tap for the meeting: The revamping of its bylaws, discussion of its mission and updates on the status of Officer Dani Lee Harris, the Eagle case and the recently-announced blue ribbon commission to mediate a federal lawsuit over the botched police raid.

Harris is a former LGBT liaison for the department who recently returned after being placed on six months of unpaid leave. She was placed on leave in April, a move the department didn’t announce publicly until questioned by LGBT activists and media. Police officials have said Harris’ three gran mal seizures since December prompted her leave.

Harris has said she was pushed out days after filing a complaint with APD alleging that a civilian employee used abusive language and discriminated against her based on gender identity and sexual orientation. She returned to duty in October, though the police department has refused to publicly discuss her leave or her why she was removed as the second LGBT liaison in agency history.

With the Eagle case, Atlanta police continue to provide few details of its internal investigation, which has continued for more than a year. At the advisory board’s October meeting, Lt. Neil Klotzer, commander of APD’s Internal Affairs Unit, didn’t discuss the investigation other than to say it’s ongoing.

Last month, Mayor Kasim Reed announced the creation of a blue ribbon commission of attorneys to reach a “just and right” end to the federal lawsuit facing the city and its police department over the Eagle raid, though he’s declined to discuss details of the panel, including its full membership, its mission or how it will be empowered to mediate the lawsuit.

The panel appears headed toward five objectives, according to a draft mission statement:

1. To gain an understanding of policies and procedures that pertains to LGBT issues and personnel and provides ongoing feedback and suggestions for improvement of said policies and procedures. This includes an understanding of policies pertaining to new recruits as well as existing staff members and includes current and future sensitivity training curriculum.

3. To advocate for more LGBT police officers on the street, promoted in the ranks, and for a visible and active LGBT employees association within the APD.

For additional details about the panel, its members or meetings from past minutes, visit its website.