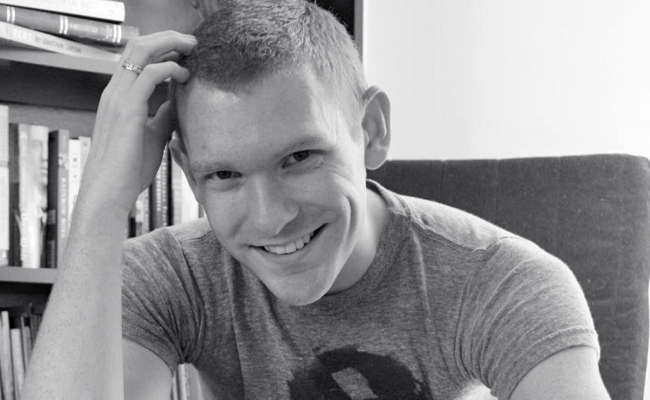 Do you think poetry is boring? Well, think again, then go grab a copy of “He Do the Gay Man in Different Voices,” the debut collection by sexy, talented gay storyteller Stephen Mills, who hits Atlanta Saturday.

Mills (top photo) paints vivid and provocative images with skilled use of vocabulary and phrasing, and he’s just one of the writers reading during Georgia Center for the Book’s Sibling Rivalry Press Day on Saturday at Decatur Library. Gay Atlanta writer Megan Volpert, as well as Jessie Carty, Loria Taylor and Bryan Borland, also appear. 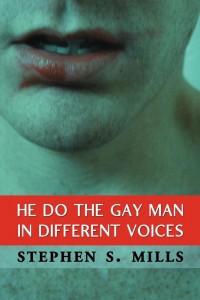 Mills talks to us about his work, his upcoming Atlanta reading, and his advice to aspiring writers.

How do you bring yourself to write such personal details into your poetry?
I’ve really always been an open person. When I started writing poetry, I shied away from the personal. I didn’t come out until I was 20, and I had been writing before then, so I think that when I came out, I had ben shying away from that because I was shying away from that side of myself.

I won’t say that all of it is actually true in that voice, but a lot of it is really based on things that I have done or thought. Since some of it is sexual or that it’s giving voice to things that you may think but often don’t say out loud, it is risky and you’re putting it out there. They’re connected to really personal things that you’re putting out there, but it is a risk worth taking.

What about for your partner?
I think I am lucky to be with a man who really doesn’t care at all about that. He has been very supportive about me sharing our lives. He always reads my work before it gets printed, and if he had an issue, I am sure he would say something. He is very open, much like me. He has never really minded. That obviously can be an issue for writers sometimes, but he is very supportive.

What inspires you?
I always tell people that ideas really are everywhere. I get ideas for poetry from everything that I experience. As a writer, you have to be open to things all the time. I keep a journal where I write down random ideas or things that I think are interesting. I may keep an idea around for a year or so, but they can still inspire me.

Describe the creative process behind your poems.
The process is different for each poem. They all start in different ways. I am a big reviser of my work. They are all revised over and over and over again. The ideas can grow bigger over time, and they expand. The center poem of the book, the one about Jeffrey Dahmer, grew as I wrote and found different ideas and outlets to explore and research, and it grew in different ways than I expected. That happens a lot with poems because they may end up somewhere different than you intended or expected.

I spend a lot of time thinking about poems. The Jeffrey Dahmer poem came from an idea I had about six months before I started writing. I had an idea that I didn’t know what to do with. I probably spent two to three months before it was a draft I would consider sharing with anyone.

Do you have any advice for writers?
The best advice is to understand that publishing and submitting your work is a lot of work. You get published because you send out work to a lot of places. You have to do research to find out what publications want your kind of work. You also have to get used to rejection. That happens to lots and lots of people. The other big thing is not to submit your work until you know you are ready. A lot of people try to submit work too early before it’s gone through a lot of revisions. You have to make sure your work is ready for other people.

Talk to us about your publisher, which is hosting Saturday’s event.
Sibling Rivalry is a new press, and it’s gotten huge attention for promoting gay writers and marketing books. Poetry is mostly published by small presses. It’s one of the only ways to get poetry out there. Often, those small presses aren’t well run, but Sibling Rivalry is great. They work hard to get the work out there and publicize it. They’re very professional.

What do you have in store for the Atlanta signing?
That reading, I’ll be with three other poets from Sibling Rivalry press, who put out my book. I am excited to meet a lot of people. I’ve met a lot of people from Atlanta through Facebook and Twitter, and I am excited to meet them face-to-face. Atlanta has a good literary feel. Each poet is very different, so there should be some good variety.

Stephen Mills reads from “He Do the Gay Man in Different Voices” during Sibling Rivalry Press Day on Saturday, April 28, from 3 p.m. – 5 p.m. at the Decatur Library. Visit him online.

Buck Cooke is a freelance writer based in Atlanta. He comes armed with a passion for pop culture and rabid appetite for arts and entertainment, scouring the landscape for treasures in music, TV, books and cinema.