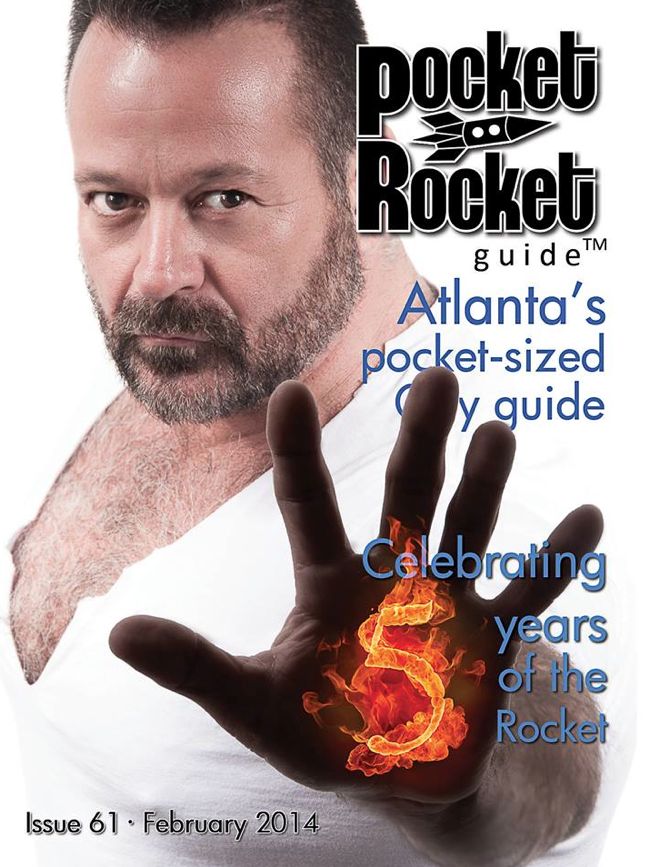 As gay Atlanta's media market shifted dramatically in 2009, a pocket-sized glossy hit the streets. Uncluttered with a simple approach and lots of photos, Pocket Rocket carved out a niche. As it celebrates its fifth anniversary, the magazine is thriving.

So we chatted with Dan Bergman (above on February cover), the magazine's co-founder, about Pocket Rocket's anniversary, how the monthly magazine started and the secrets to its success over the last five years.

What prompted you to launch Pocket Rocket in 2009? What was it like to take it from an idea to printing and distributing that first issue?

[Woof's owner] Gary Sisney brought a small black and white Xeroxed publication from New Orleans. I think it was called the Lamplighter. He asked, “Do you think something like this would work in Atlanta?” Joshua Campbell and myself talked about it and said yes. A pocket sized gay guide for Atlanta? We think it can make that happen. We were just crazy enough to think that we could do it. Neither Joshua nor myself had any experience with this type of thing and we started playing around with the idea.

The name Pocket Rocket Guide came quickly (from our friend Turpin Tolle) and the logo and design work ensued. Joshua was the graphics guy. I was the sales guy. We found a local printing company. Within four to five months we were ready to publish our first issue. It was hard 24/7 work, but it seemed to make sense from the start.

What was the magazine like for its first issue and how has it changed to today?

Our first issue was black and white, 32 pages. It was rough, but the concept was pretty easy to understand. No clutter. Just what to do and where to go in Atlanta. It was simple. I think we have managed to keep that basic idea intact. We have doubled in size. Distribution has increased. We have gone to full color and modified or added a few more features to keep things interesting: Rocket Fuel (our social media outlet), Rocket Pics (always super popular), and a photo editorial that really gives some very talented local photographers a way to be seen and heard). We are still a very Atlanta based publication. We use local talent and models. That is extremely important.

The gay media landscape in Atlanta has seen lots of changes (and drama) in the last five years. What's your secret to success and survival?

Keep it simple. Keep it positive. Keep it within reach. Avoid drama, which is easier said than done, and sincerely try to stay true to what you say you can do and then do it. What is best for our clients is what is best for Pocket Rocket Guide. I have always felt there is room in Atlanta for any publication or media outlet that has an opinion. It can work as long as they are willing to stick to what is important to Atlanta with a sense of integrity, style and professionalism. Maybe it is naive but I really believe that. We have proven we are the little train that could.

What's your proudest moment or accomplishment in the magazine's history?

Saying we are the longest-running, continuous gay [print] publication in Atlanta means something. I think the rocket visually is a pretty brilliant branding idea. When one of our photographers walks into a bar or event holding the rocket and people say, “Pocket Rocket is here!” that is very cool indeed. The fact that Pocket Rocket Guides are popping up in other markets is fantastic.

What about your biggest regret? Or something you'd do differently? Or a moment you thought the magazine wouldn't survive?

Now, don't get me singing Frank Sinatra. Regrets? I've had a few. But then again, too few to mention. Personally, I feel when we become involved in something it is to represent our clients, our community, and our publication together. I have seen and learned a lot about what that means. It is much harder to balance that concept than I ever could have imagined. We have had some great successes and a few misfires. But even if it does not turn out as intended, the place it came from was pure, justified, professional and real. We are not here to change the world. We are just an integral part of it. We have had a few huge changes recently and it has been a real challenge to keep perspective. We will move on and stay focused. I am proud of that. As soon as that drive isn't there then something will change. That's business.

What can readers expect in the future?

It is time to explore our options and flex a bit of muscle with the editorial side of the publication. We will be adding more bite. This ain't your mommas Pocket Rocket Guide! We need a bit more to actually read. It is time for that. As long as it's basically positive, entertaining, and speaks to the Atlanta community, then it will make sense. After that, world domination. Why not?

Any closing thoughts on the magazine?

Five years. Damn! We really want to thank Atlanta for the support. Thank you Businesses. Thank you Rocket Fans. Thank you to our staff for all the hard work and dedication. We sincerely appreciate the chance to be a part of our very diverse community. I know it sounds cheesy, but it really is important to feel like we are all part of something. It really is. Now, I believe the Rocket needs to move on to more cities and markets and let the brand expand. Does the Rocket want to fly? Yes!