Play: What happens after ‘Mommie Dearest’? 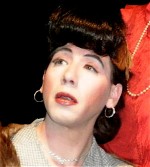 Payne’s first draft of the play was back in 2004, but he quickly learned that he didn’t want to make this a simple story–or one with the histrionics of the campy Faye Dunaway movie “Mommie Dearest.”

“I wanted to flesh out the notion of what ‘Mommie Dearest’ would look like to Joan,” he says. “I learned more about her and realized this was really a family show.”

In the play, daughter Christina (Barbara Cole Uterhardt) has a stroke after watching the film version of her book “Mommie Dearest.” She is visited by her grandmother Ana (Betty Mitchell), who takes her through Joan’s life—from the time she was Lucille to the time she changed her name to Joan Crawford and the actress’ subsequent life—to give Christina an idea of who the woman really was.

Besides the often-volatile relationship Joan (Payne, photo) had with Christina, Joan had a strained relationship with her own mother.

“Ana saw affection as a weakness; she taught Joan the value of hard work,” Payne says. “Joan was on her own, and she attempted to instill that in Christina.”

Christina’s side of the relationship story was documented in the book, later made into the film. No one thought their relationship was ordinary, but some questioned whether it was as bad as Christina suggested.

DeWayne Morgan, who is directing the production for Process Theatre Co. at Onstage Atlanta, feels that some of what Christina says might have been exaggerated.

“I think a lot happened, but a lot was her anger,” he says. “Maybe she embellished it, like all daughters do!”

Morgan thinks the relationship completely fell into the sewer after Joan took over for her daughter on the soap opera “The Secret Storm.”

Payne does feel that Christina believes what she wrote, but he’s a little leery about Christina’s assertion that she wrote “Mommie Dearest” as a diary while Joan was alive, then took it to publishers after her death.

The grandmother character serves to wake up Christina and let her know that she can be an eternal victim, known only as Joan’s daughter, or move on.

“In a moment of decision, she has to prove she is more than that,” Payne says.

The playwright says the image-obsessed Joan would have been floored by the film version of “Mommie Dearest.”

“I don’t think we’ve had an entertainer who reached for perfection the way she did,” he says. “She only left the house as Joan. She would have been mortified by the movie. Image was so crucial to her. Her most important relationship was with her fans and the audience.”

Morgan feels there are a few moments in the script where this Joan has her Faye Dunaway moments, but for the most part, he feels Payne creates a three dimensional character.

“He has researched her from A to Z and knows everything about the character,” Morgan says.

As the two prepped for Friday’s opening night, they realized one item now forever associated with Joan Crawford was nowhere in the script: wire hangers.

Eventually, they decided to throw in at least a reference.

“You can’t tell a story about Joan and not acknowledge wire hangers,” Morgan says. “We knew there would be an expectation. So we do it and put it in context. It’s important to give ‘em what they want.”