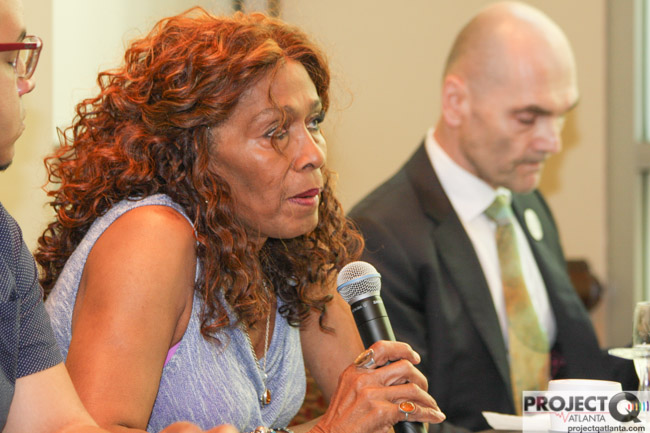 A queer social justice advocate is spearheading the creation of an LGBTQ youth center in Atlanta named after late transgender pioneer Cheryl Courtney-Evans.

“We want to be able to provide a lot, but our main focus is definitely going to be focused on youth,” they added.

Courtney-Evans (top photo) was an Atlanta transgender activist who died in October 2016. She was the executive director of Transgender Individuals Living Their Truth, which served the needs of trans men and women. Her advocacy work prompted Atlanta Pride to name Courtney-Evans as one of its 12 grand marshals in the 2016 Pride parade.

Couvillon said the center is meant to be a continuation of Courtney-Evans’ legacy.

“It’s been on my mind for a while because I feel like it’s one of those bystander effect things where everyone wants one, but no one wants to start one because everyone thinks that someone else is going to start one,” they said.

The genesis of the idea occurred under tragic circumstances for Couvillon. First, it was the 2017 shooting death of Scout Schultz, the leader of Georgia Tech’s Pride Alliance. Then came the suicides of two transgender Georgia Tech students – Schultz’s ex-partner Dallas Punja and Schultz’s friend Kirby Jackson. Couvillon was friends with all three.

“That triple domino effect made me want to jumpstart everything and really want to get a move on starting an LGBTQ+ community center,” Couvillon said.

They held a community town hall at the Phillip Rush Center in May to discuss what an inclusive LGBTQ community center should look like. They’re now in the process of establishing the center’s nonprofit status so they can start raising money. Couvillon said a financial expert will nail down a budget, but that they hope to raise “a few million dollars.”

A portion of those funds will secure a physical structure for the center. Couvillon said this is necessary to achieve the center’s mission and so that it offers something different than the Rush Center does.

“The Phillip Rush Center is mainly just office space, and they don’t really have the space to accommodate much more than that,” they said. “So, that’s why this physical space for an LGBTQ community center is something that Atlanta has been lacking since YouthPride.”

YouthPride was a once-thriving nonprofit that cared for LGBTQ youth, but it struggled in its final years before closing in 2014.

[Cheryl Courtney-Evans] will always be a District 58 neighbor who served our community well,” Cannon said. “We are in the early stages but want to continue the work she did to uplift trans and [gender nonconforming] Georgians.”