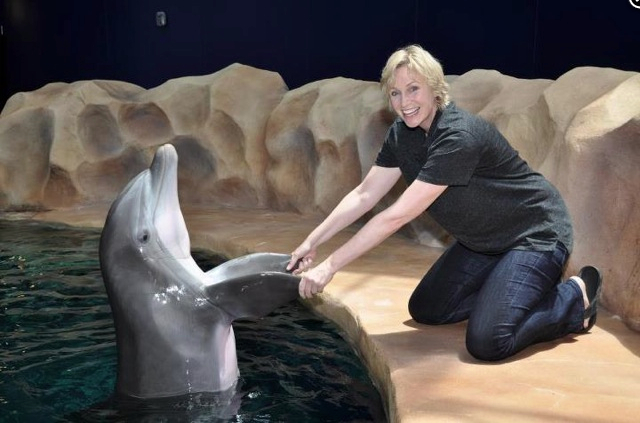 Whiny whale lovers PETA, sensing that their proxy lesbian actress Jane Lynch is beloved among the gays who really don’t care what she thinks about captive animals, is now acting like a petulant diva and accusing Atlanta Pride of being misogynistic for ignoring their calls to move Friday’s kickoff celebration. So PETA is throwing a protest outside the Atlanta Pride Kick Off Party at the Georgia Aquarium. PETA’s gay senior vice president, Dan Matthews, sent a blistering letter to Pride Managing Director Buck Cooke on Monday, throwing a fit that the non-profit hasn’t officially responded to his call to move the party to a location without dolphins and other animals that don’t dance. PETA is concerned that noise from the massive, sell-out party will disturb the captive animals. They enlisted Lynch to their cause and she sent a letter in September, even if she’s been photographed enjoying the Georgia Aquarium while holding dolphin fins in a way that can’t be comfortable (or natural) for either of them. The Aquarium has said the party doesn’t impact its inhabitants. Pride’s response? Suck it. The full letter from the People for the Ethical Treatment of Animals:

Buck Cooke, Executive Director Atlanta Pride Dear Mr. Cooke: As a longtime sponsor of Atlanta Pride, PETA is disappointed that the Pride committee hasn't had the courtesy to reply to our concerns over the Georgia Aquarium party during the past year. As a result, we'll bring these concerns directly to partygoers through a protest at this year's pride kickoff event at the aquarium on October 12. That very day, the aquarium will come under fire at a Washington, D.C., hearing over its controversial plans to import 12 wild-caught beluga whales from Russia. Atlanta is the nightlife capital of the world—why insist on celebrating our freedom in a venue that celebrates captivity? Since last year, out of concern for sound-sensitive marine mammals, the U.S. Navy altered ship routes, the Toronto aquarium announced it would feature no marine mammals, and gay icons Jane Lynch, Martina Navratilova, and Elvira have spoken out against the Georgia Aquarium's loud events. Are you ignoring them because they're women? Do we need to hire male strippers to deliver a singing telegram in order to get your attention? I attended last year's event and personally spoke to three exhibit guides who said that various animals get distressed and even "get to fighting" during the parties. Many of us in the gay community, especially Georgians, are perplexed by the Pride committee's lack of professionalism on this issue and are examining ways to reach the board about your peculiar relationship with the aquarium. We remain ready to have a dialogue. In any case, we'll see you on October 12. Sincerely, Dan Mathews Senior Vice President, PETA