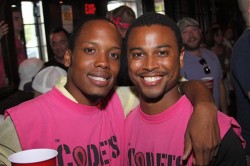 The Pink Cadets of the Hotlanta Softball League know how to do at least one thing well: Organize an event and throw a party. They play softball pretty well, too, leading their division with a 9-1 record.

But back to the parties: These are the same Cadets that brought drag softball to Piedmont Park earlier this year and later stripped off their shirts to wash cars in a restaurant parking lot. It’s all in the name of charity. The funds the team raises, including $4,200 for the drag event and $1,200 for the car wash and a related Jell-O shots sell-a-thon, boost the charity contribution they will make at the end of the season to Susan G. Komen for the Cure. 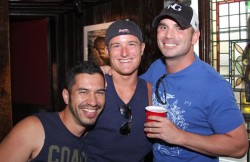 Last Saturday, the Cadets were at it again. This time they organized a handful of teams and about 45 people for the Big Gay Amazing Race: Midtown. Teams were organized by color and went on a scavenger hunt of sorts with check points across Midtown. In each place, the teams had to perform challenges to gain points. The team with the most points won.

But from the looks of the post-race beer bust at Burkharts, everyone was a winner. Maybe it was the Jell-O shots.