Photography of the flesh at pb&j gallery [photos] 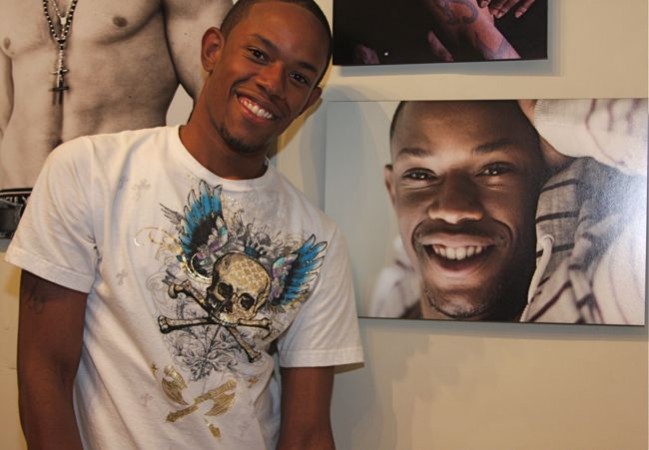 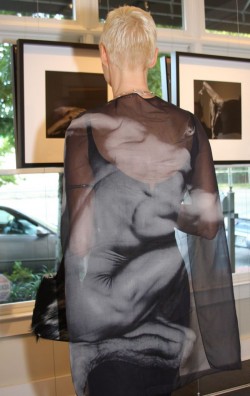 The gay-owned pb&j gallery in Kirkwood explored photography of the flesh when it opened “Body + Space” earlier this month with an event that included several of the photographers with work in the exhibit.

We’re used to exhibits with a little, um, physical edge out of the gallery from owners (and partners) Bob Burkhardt and Jack Simonetta. They offered a little sizzle when the gallery opened “Body & Soul” earlier this year.

This time around, “Body + Space” features the work of Bavarian-born Eva Mueller, who explores the human form in movement and the relation of body and space. Put more plainly for those without art degrees: Model and dancer Oliver Tobin is shot nude against a black backdrop, captured in curious exploration.

Mueller humored us as she snapped pics with her iPhone of the gallery and her work during the June 4 opening, quipping that she was sending them to friends. She also teased us with a wrap (second photo) that prompted a double-take. At first glance, the full-body scarf seemed not all that special. Take a second look, with light shining through it, and it’s clear that the garment is inspired by Tobin and his work with Mueller.

“Body + Space,” which runs through July 18, also includes the work of Burkhardt, Rohn Meijer and Rob Simmons. One of Burkhardt’s models, Kelvin Barlow (top photo), was on hand for the opening, as was Brett Nabors, a model for Simmons.