Phoenix ready to be your Wednesday ‘Fantasy’ 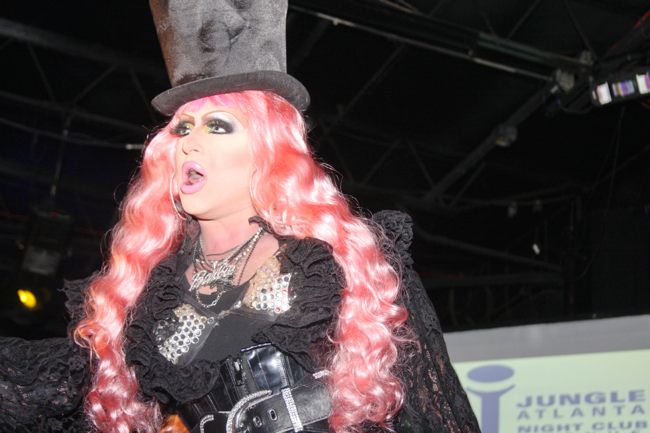 Phoenix wants to be your fantasy. Not every night. Just once a month. And this drag queen, performer and “RuPaul” reality star wants the flirtation fantasy to start Wednesday at Jungle. She’s pulling out all the stops, too, for “Fantasy Girls.” It’s the rebirth of a popular show she’s done before, but this is much more than a retread of an old idea. It’s cabaret, old girl. Theatrics. Table seating. Drag for the drag aficionado. We caught up with Phoenix (photo) to dish with us ahead of Wednesday’s premiere about the show, special guest Morgan McMichaels, the cast and why queens should come out on a school night. Some queens will roll their eyes at the thought of another drag show. What makes "Fantasy Girls" special? LOL, queens will be queens. Well this is not just another "drag show." I didn’t want to call "Fantasy Girls" a drag show. People tend to forget the theatrics and the art of drag. Most look at drag as a filler for a night or an extra bonus at a bar. "Fantasy Girls" is celebrating the art. Because of the setup at Jungle we can do a full theatrical show with lights, curtain, props, etc. This show is definitely for someone who loves and enjoys good drag. "Fantasy Girls" is a show you helped produce in 2010. Are you bringing that back, or is it a reinvention? Yes, I did create and help produce "Fantasy Girls" in 2010. The legendary Charlie Brown’s Cabaret had been out of the scene for a couple years and while traveling around the country’ I realized Atlanta needed a new cabaret. Don’t get me wrong; I love all of my bar shows. But I felt we were missing that element of drag. So I created "Fantasy Girls." I guess I’m doing a little of both. The show has been stopped for over a year, and people have asked about it, so I threw the idea at the Jungle and here we are. I guess in some ways I am reinventing it as well. I’ve had a very busy couple years and with that has came more knowledge. Also, the cast for the most part has been redesigned to fit my vision. Morgan McMichaels will share the stage with you for the May 23 opener. How did that come about? Yes! I’m so excited!! Morgan and I have been friends for years. Before either of our "Rupaul’s Drag Race" fame came around, I lived in LA and we were close friends there. Morgan has never been to Atlanta and has always wanted to, so I thought this would be perfect. Plus she's a bad bitch, so why not? Who else hits the stage for the debut show? I have such an amazing and diverse cast of entertainers. For this show, I have Savannah Leigh, Envy Van Michaels, Summer Knight, Star Sanchez Sherrington, and Nicole Paige Brooks is on the mic. This cast could remain or possibly be changed around from show to show. Girl, it's a school night. Why should the gays come out on a school night? I know, I know it’s a "school night," but come on. A mid-week cocktail with some great entertainment never hurt anyone. "Fantasy Girls" begins kinda early (10 p.m.) and will be over by midnight. Most are still on Grindr at that hour. Plus the show is set up where it could be low key and relaxing. OK, give us your best pitch. We're not asking you to lip synch for your life, but why we should come out to see you and the queens on Wednesday? Girl, don’t make me lip synch for my life again! Everyone loves good entertainment, so "Fantasy Girls" is that! It’s a night of art, glamour, beauty, cocktails and fun! What else do you need? I think we are offering an amazing show to someone who has a love for the art of drag. Almost forgot. Excited about Sharon Needles at the June show? Yes! I’m so excited about Sharon! I was a fan of hers throughout the whole season. I’m a sucker for someone who brings something "out of the box." I’m also just as excited for Latrice [Royale, July's special guest]! She was so amazing on [RuPaul’s] show. I’ve never met her before. I really hope she’s exactly how she was on the show. Simply fab! "Fantasy Girls" debuts on Wednesday, May 23 and continues on the fourth Wednesday of each month. Doors open at 9 p.m. with the show starting at 10 p.m. Cover is $10. Tickets and VIP packages are also on sale for "Fantasy Girls" on June 27 with headliner (and "RuPaul" winner) Sharon Needles. Bring your order confirmation to the May 23 show and receive free admission.