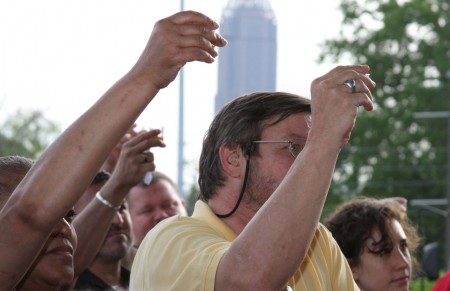 To understand the expanse of people Phillip Rush touched during his years of work with gay organizations and other non-profits, all you had to do was spend a few minutes Friday at a gathering in his honor.

Friends and colleagues packed Frogs Cantina in Midtown during a community gathering for the longtime gay activist. The crowd included leaders of several LGBT organizations, elected officials and former co-workers from the Community Foundation of Greater Atlanta, where he worked for 15 years. Rush, 55, died on April 28 from complications relating to a blood clot.

Rush frequented the eatery, so friends thought it an appropriate venue to toast him one last time.

“If you did not find Phillip in his office, you found him at Frogs,” says Doug Carl (bottom photo) , a friend of 12 years who organized the gathering and delivered the first toast. “That was his gathering place for meetings and talk discussion. That’s where he did what he did best.”

Rush’s death has received coverage from several media outlets. His work with LGBT groups was also remembered Satruday during a moment of silence at the 22nd Annual Atlanta HRC Gala Dinner & Silent Auction .