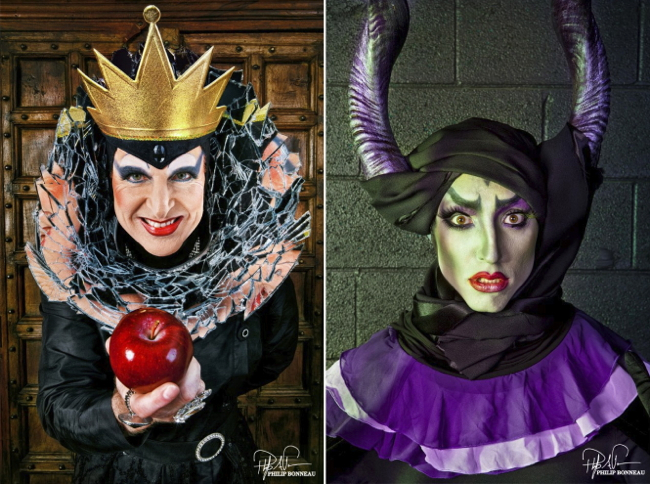 Gay Atlanta loves us some photographer Philip Bonneau. And he loves us right back on Friday with the highly anticipated opening of “Heroes + Villains #3,” the latest installment in his series that re-imagines famous characters with a big gay twist.

After taking gay Atlanta by storm with “Heroes + Villains Issue #1” last year and the popular sexy gay super heroes of “Issue #2” and its packed opening reception in April, the photographer and his slick, high-end concept on a short, self-funded budget garnered attention national attention.

Then the train really left the station. Bonneau needed “Heroes” of his own to make the dream of taking his art to the next level. He got them by the hundreds in a gay groundswell of Kickstarter crowdfunding. He even got naked to boost the support to some $16,000. Then he got to work casting the series and putting the money toward the project. Now Bonneau fully realizes his dream at Friday’s opening of “Heroes + Villains #3” at i.d. Lab.

The reception kicks off an exhibit that runs through Dec. 7 and incorporates gender bending as well as characters beyond comics from pop culture and Disney (top photos, view more samples in the gallery below). Portions of the proceeds from sales of the work benefit AID Atlanta. It’s yet another of the Best Gay Things to Do in Atlanta This Weekend.

Bonneau took a break from hanging the prints and planning final details of the “Heroes” opening to talk to us about his big year.

How did the Kickstarter crowdfunding impact your work and this installment of “Heroes + Villains”?
Kickstarter was an incredible experience for me. It was one of the hardest things I’ve ever committed myself to do. I knew going into it that in order for it to be successful I had to be open and honest about what I was trying to do and ultimately myself. In a huge way. It was humbling because it was me asking for money which I had never done before.

What I did not expect was the army of support I received during Kickstarter and those that had become introduced to my work. I think somewhere along the way Kickstarter helped me discover confidence and a sense of responsibility to my work. I was selling people a dream, and I was very fortunate for it to be bought in spades.

With the money collected I was able to definitely evolve on a technical level with the work, but in the end it was all these incredible people that supported me, worked with me or were just there for moral support. I think what Kickstarter has made this a communal event involving so many people of different walks of life that when anything was needed from there on out I knew all I had to do was ask for help.

What does it mean to you to connect with fans of your work on such a broad scale?
I feel that I owe this incredible opportunity to all of them. What I raised would of taken me at least five years to do if at all. “Heroes + Villains” would not be what it is without that support and people’s interest in it. I feel like I am a child of Atlanta that has truly been blessed. [Because of the personal following], people walk into any of my shows knowing a bit more about my work or why I did something. They start to understand it a bit more than they could going into something blindly. They can see that a piece represents something internal with me and with the models as well. The audience is the one that makes or breaks a show, and my audience has been awesome

What makes “Issue #3” different than its predecessors?
H+V3 is definitely a different beast than the prior shows. I hinted with my Kickstarter pledge that this series ultimately represents life. The first one was very childlike, second one was still questioning itself. I was questioning myself and unsure of what I was doing was right for me. This show is adulthood. It shows that confidence. You really get a sense of the world I’ve been creating in this show. This show is also more theatrical than the others. Having a budget to make things really shows in this one. When in the past less was more, this one is over the top in character portrayal.

At this point in the series I had already tackled a good majority of Marvel and DC comics. If this was to be the next step I had to open up the world a bit more. It has comic characters, 80s cartoon characters, Disney and even Star Wars and Star Trek. I pretty much have tapped into my entire childhood and skewed it forever. The main theme of this issue is that everyone is unique and beauty is found in even the strangest of things. As a collection, you can really see the beauty of everyone’s individuality and that no one is ever alone.

If a viewer could walk away from this exhibit with one message, what would you want it to be?
Do not be fooled by appearances. Respect everyone for who they are, and know that there is common ground to be had with people. This is a show about stepping away from reality for a bit and just enjoy life and who you are. These people on these walls are some of the most beautiful people in the world to me. They have shared a part of themselves that most people never see, and this show celebrates them giving us a chance to see that.

Tell us about Friday’s opening reception.
The opening is out of control. On the shoestring budget for an event of this size, it will definitely be something to remember. I try not to look at the numbers of people attending or those that I know are coming. I start freaking out. Any artist dreams of a big opening and this one is definitely mine. DJ Chris Griswold is spinning the event, and Chris Knightes performs on silks as Nightcrawler. Ultimately this event is for AID Atlanta, and a chance to have my Heroes+ Villains give back to the community a bit.

For anyone on the fence about attending, it’s the only night to see the entire show as it was meant to be seen. Twenty-seven wall pieces are being auctioned off with partial proceeds going to AID Atlanta. I always only do 20 lifetime prints of any image. As the bid price increases, the lifetime print number decreases and the donation to AID Atlanta increases. The opening night is the only night I offer comic book prints as well. I have 24 different images available for sale making it around 50 pieces of work to look at.

What’s next for you and your photography?
I think for me definitely a two month break is in order first. Based on the opening reception, I will decide if I can do a “Heroes + Villains Annual #1” in the Spring to kind of pick up the characters that had to be dropped due to size and just conflict of scheduling. Some of these characters have other explorations to them that are not showcased in this show. I think more of a recap of the best of the last three series is a great way to get people for the swan song of “Heroes + Villains” in fall 2013 with Issue #4.

Anything you’d like to add?
All I can say is thank you Atlanta and everyone else who has supported me and my dreams. On Friday, you decide if I lived up to the promise I made with my Kickstarter. Am I a hero or a villain? The choice is yours to decide.