"Will we condone Karen Handel's vote for YouthPride that promotes teenage homosexuality," the narrator asks as she issues takedowns of Handel and Gingrey's other opponents.

The Republican primary also includes Art Gardner, David Perdue, Derrick Grayson, and U.S. Reps. Jack Kingston and Paul Broun, who likes his boy penis. It's a collection of candidates, other than gay marriage supporting Gardner, that prides itself on opposing anything that even sniffs of LGBT equality. Gingrey, after all, jumps at any chance he gets to denounce LGBT issues.

Gingrey's new ad recycles allegations from 2010, when Handel faced Nathan Deal in a governor's race that became one of the state's most anti-gay on record. Deal and other candidates slammed Handel for her gay-supportive ways as a candidate in Fulton County and her tenure when she served as Fulton County chair.

Handel's anti-gay opponents criticized her for supporting gay adoptions (she didn't), joining the gay Georgia Log Cabin Republicans (she did) and supporting YouthPride. On that last one – supporting YouthPride, a group that has since fallen into controversy and scandal thanks to its self-appointed director – the record isn't clear. But Handel, when she took a hard right turn during her successful 2006 run for Secretary of State, disavowed any support of LGBT issues and ran even further from her courting of LGBT voters in 2010.

Since, she's stressed her conservative bonafides by championing Chick-fil-A, recruiting anti-gay women like her to run for office, basking in her anti-gay womance and collecting a merry band of anti-gay supporters. 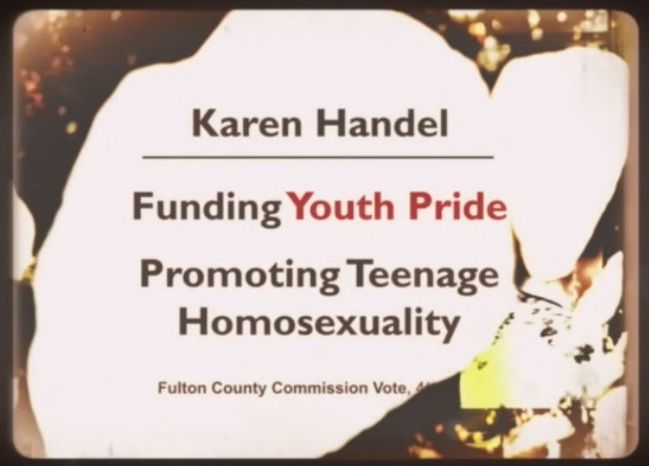