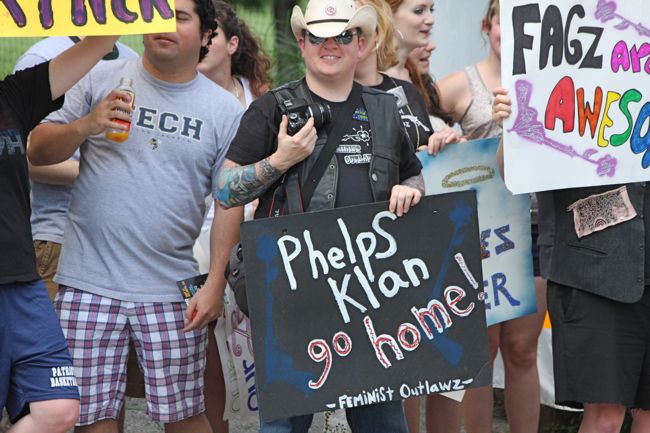 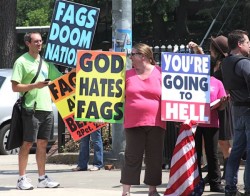 A polite protest in Midtown pitting a handful of anti-gay activists against hundreds of counter-protesters turned chaotic on Thursday when the crush of counter demonstrators rushed across 10th Street and swarmed the small group from Westboro Baptist Church.

The confrontation surprised the scores of Atlanta Police Department officers who were monitoring the protest, which started about 3 p.m. at the 10th Street entrance to Piedmont Park near Grady High School. The counter demonstrators clogged 10th Street and filled Charles Allen Drive as the church members fled.

Within minutes, the ranks of the police officers expanded, police cars – lights flashing and sirens blazing – worked to contain the crowd on Charles Allen and several members of the department’s controversial Red Dog Unit appeared. The unit was involved in the raid of the Atlanta Eagle last September and complaints from patrons inside at the time prompted the police department and the Atlanta Citizen Review Board to launch investigations into allegations that officers verbally and physically abused some customers. 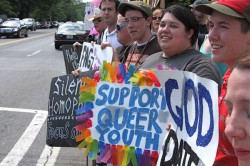 On Thursday, when several members of the Red Dog Unit dressed in paramilitary gear emerged from a nearby staging area to join officers already near the large crowd, the group stood south of the counter protesters on Charles Allen but didn’t directly engage them.

A short time later, the remaining counter-protesters were ushered along 10th Street toward Monroe Drive when police spotted an unattended bag left under a nearby tree, according to the GA Voice. A police bomb squad was dispatched and with a police helicopter overhead, a Grady student arrived about 30 minutes later to claim the backpack.

After more than a half-hour and with a helicopter overhead and the bomb squad on the scene at the park, a Grady High School student strolled up to police saying he left his black messenger bag under a tree. Police gave him the bag and after asking a few questions he was allowed to leave with it.

Daniel Gilstrap, a Grady sophomore who attended the counter-protest, said he was embarrassed and was told that the whole protest was moved because of his bag. He also showed nothing was in his bag besides some papers with stand-up writing and a ruler. He’s a budding comedian, he said.

The protest was one of nine scheduled over two days in metro Atlanta by the Kansas-based church. Many members of the church are related to Fred Phelps, though the patriarch did not appear at the Midtown event or one Wednesday morning in downtown Atlanta. The church was targeting high school students, Jewish groups, an indie rock festival and supporters of LGBT issues.

Grady student Becca Daniels organized the counter protest on Thursday, drawing thousands of supporters to a Facebook page she created. She also blogged about her effort on Tuesday for the GA Voice.

We did not want a hate group coming into our community preaching their twisted, hateful words. We knew their protest to love would do damage to the residents of our neighborhood, which has a large LGBT community. It became unanimous that whatever we did was to be completely separate from Westboro. This was no longer just about Westboro, it became something much bigger and better. Our focus was spreading our message of love and acceptance.

By 3 p.m., the small group from Westboro was in place and counter-protesters were arriving. Phelps’ clan was stationed at the southwest corner of the 10th Street and Charles Allen intersection with counter-protesters across 10th Street at the Piedmont Park side. The crowd of counter demonstrators swelled about 3:30 p.m. when students from Grady began arriving. 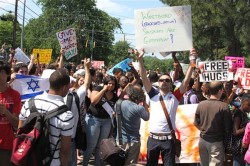 Motorists honked and yelled their support for the counter demonstrators, who carried signs with slogans including, “I Am Proud 2B Her Partner,” “Practice Tolerance,” “Gay is the New Black” and “Girl! God Loves Even You Fred!”

Some people taking part in the counter protest, including longtime LGBT activist Betty Couvertier, questioned police commanders at the scene about the absence of Officer Dani Lee Harris, the department’s LGBT liaison. When questioned by a reporter, Major Khirus Williams – commander of Zone 5, which includes the Eagle and the area where the protest unfolded – attempted to reach Harris by telephone but was unsuccessful.

Harris and the role of the department’s LGBT liaison came under fire after the Eagle raid. Harris was not notified about the undercover investigation leading up to the raid; she learned of the raid and eight arrests the next morning from a reporter. Acting Chief George Turner later said he would “tweak the way we inform her of issues.”

The protests in Atlanta have received considerable media coverage:

Grady protest: ‘The future is with us, not them’ (GA Voice)