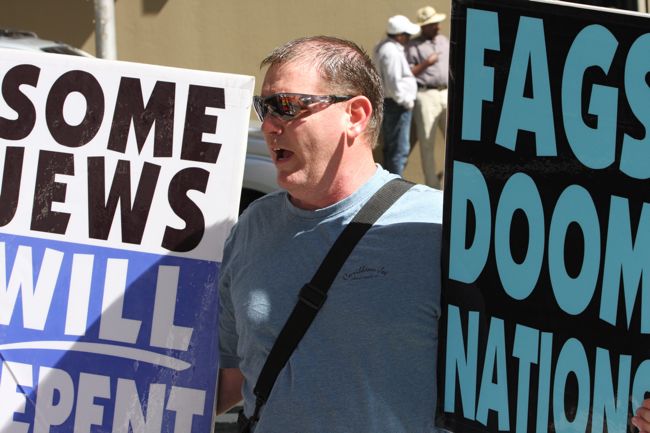 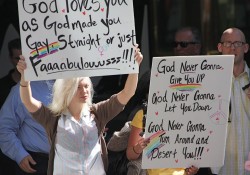 Counter-protesters and a phalanx of police officers greeted members of the Westboro Baptist Church in downtown Atlanta on Wednesday morning as the anti-gay group opens a series of nine protests here over two days.

While in Atlanta, the group — led by controversial Kansas pastor Fred Phelps — is targeting high school students, Jewish groups, an indie rock festival and supporters of LGBT issues. Counter-protesters are organizing to join the Phelps’ clan during their stops.

On Wednesday morning, four adults and two children carried signs with anti-Semitic and anti-gay slogans that included “Fags Doom Nations,” “God Hates Jews” and “Rabbis Rape Kids.” They sang as they stood near the Atlanta Marriott Marquis targeting attendees at a conference “to provoke the Jews to jealousy.” Counter-protesters stationed across Peachtree Center Avenue outnumbered the group from Westboro.

Atlanta police had a heavy presence, including a high-ranking commander and several officers near protesters. A group of motorcycle officers was stationed a few blocks away. 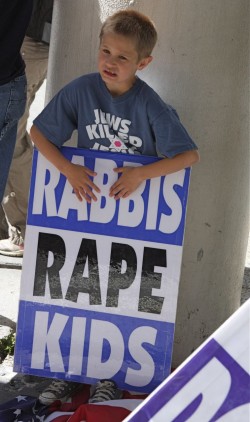 Phelps, the church patriarch, did not appear at the opening protest. The group plans four other protests on Wednesday, according to its website:

• 6:15 p.m. to 7 p.m. — Verizon Wireless Amphitheatre, 2200 Encore Parkway, Alpharetta. “WBC to picket Project 9-6-1 Cinco Party with Three Days Grace, Seether & Chevelle. These perverts have a platform God has given them to enfluence this nation. They should be using their position to teach obedience to God’s standards, not disobedience!”

• 5:15 p.m. to 6 p.m. — The Selig Center, 1440 Spring St., Atlanta. “WBC will picket the “Israel As a Demoncracy” Symposium Series (Israel Democracy Institute) to warn you that the Anti-Christ Beast Obama is not your friend.”

A counter-protest on Thursday is being organized by Becca Daniels, a Grady High School student who created a Facebook page and blogged about the effort on Tuesday for the GA Voice.

We did not want a hate group coming into our community preaching their twisted, hateful words. We knew their protest to love would do damage to the residents of our neighborhood, which has a large LGBT community. It became unanimous that whatever we did was to be completely separate from Westboro. This was no longer just about Westboro, it became something much bigger and better. Our focus was spreading our message of love and acceptance. 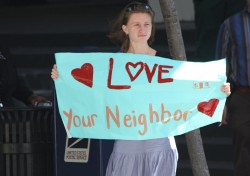 Grady’s Acceptance, Tolerance and Love Demonstration is scheduled for 3:15 p.m. to 6 p.m. at the high school in Midtown. A second Facebook invitation, Peace and Love Promotions – Counter WBC Protests, urges supporters to “stop [the WBC] message of hate and spread our message of love.”

On Tuesday, the Atlanta Pride Committee asked its supporters to make a donation to the Georgia Safe Schools Coalition to counter the Phelps protests.

In response to Fred’s detention worthy behavior, we are asking you to make a donation to GSSC. EVERY $10 YOU DONATE allows the organization to provide an educational binder to school personnel, giving them the tools to provide a safe environment for LGBTQ students. Because GSSC doesn’t currently have a way to collect online donations, Atlanta Pride will be collecting donations for them for a period of one week (May 4th-May 11th).

The note also explains how to make the donations to the coalition through the Pride website.

If all of that isn’t enough, listen to Shirley Phelps-Roper go head-to-head with James Hipps of The Gay Agenda. Hipps hosts a weekly blogcast on Wednesdays at 8 p.m.

Westboro members, many of them related to Phelps, have staged anti-gay protests in their home city of Topeka and around the country since 1991. In recent years, Phelps expanded his protests to include the funerals of slain soldiers, saying the military deaths were the result of God’s wrath to punish the U.S. for its tolerance of gay men and lesbians.

This fall, the U.S. Supreme Court will hear a case in which the family of one solder sued the church to halt the demonstrations. A lower court ruled that the family had to pay the church’s court costs of $16,500.

Recently, Nate Phelps — the estranged son of Fred Phelps — spoke publicly about the fear, intimidation and abuse he experienced before leaving the family and the church when he turned 18.