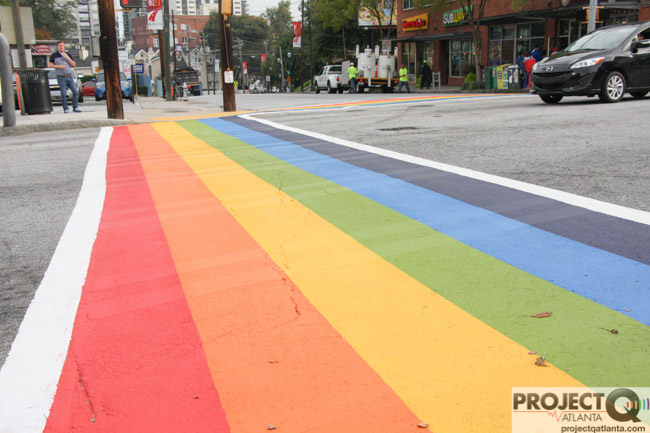 An LGBT Atlanta activist wants rainbow crosswalks to return – permanently – to a Midtown intersection and has launched a petition urging city officials to do just that.

The online activism from Sarah Rose – Atlanta: Permanently Install LGBTQ Pride Crosswalks at 10th and Piedmont – has received more than 10,000 signatures since it was launched. The petition seeks the return of crosswalks installed at the intersection of Piedmont Avenue and 10th Street in October 2015 during Atlanta Pride.

Rose said the permanent installation of the crosswalks would be a powerful gesture by the city. Rose is social media coordinator and LGBTQ issues advocate for Care2, the platform that is home to the petition.

“I saw firsthand what those crosswalks meant to Atlanta's LGBTQ community when they were painted, as well as the disappointment when they were removed,” Rose said in a prepared statement on Monday.

“As a transgender woman and advocate, as well as an Atlanta native, I have seen the power of Atlanta's queer community, and the return of the pride crosswalks would be a simple but affirming gesture for our city,” Rose added.

The petition makes a succinct request – return the rainbow crosswalk to the intersection. Or maybe the colors of the transgender pride flag. Or both.

In 2015, the crosswalks of 10th and Piedmont in downtown Atlanta were painted rainbow to commemorate pride. 10th and Piedmont is considered by many to be the “epicenter” of Atlanta's LGBTQ district – and the surrounding area is a huge gathering place each year for Pride.

After Pride, the painted crosswalks were removed – much to the disappointment of Atlanta's LGBTQ community. Ever since, the community has been vocal about wanting the crosswalk to return.

Join me in urging Atlanta's city officials to make the 10th and Piedmont pride crosswalk a permanent Atlanta fixture – with the rainbow or trans pride flags, or a combination of both.

By Monday afternoon, the petition had gained 10,526 supporters, though just 32 were in Atlanta.

Supporters of rainbow crosswalks petitioned city officials to make them permanent in 2015. It didn't work.

In 2015, some 221 donations raised $44,911 to install rainbow crosswalks in the Midtown intersection. Organizers wanted them to be permanent, but the installation turned into a two-week temporary project after a back-and-forth between supporters and city officials. The city apparently initially OK'd the crosswalks as a permanent installation but then pulled back when the Department of Public Works objected over safety concerns.

After that, the non-profit created for the project – Atlanta Rainbow Crosswalks – gave the more than $16,300 remaining in donations to seven non-profits and folded. It's founder, Robert Sepulveda, Jr., was crowned a prince, dumped Atlanta and moved to Los Angeles in a cloud of controversy made for reality television.