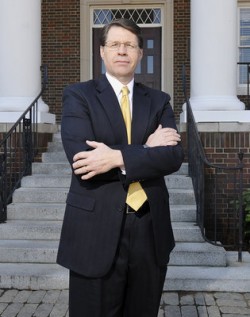 The anti-gay loyalty oath put in place by Shorter University in north Georgia is sparking concerns of witch hunts and an online petition that, no doubt, will fail to convince the Christian school’s Bible-thumping trustees to change their minds. A witch hunt! Just in time for Halloween! Nearly 1,800 people have clicked to support an online petition hoping to Stop Shorter University from requiring faculty and staff from being forced to sign a lifestyle pledge. Employees of the school aren’t being forced to sign the pledge – which bans gay, non-Christian, sex without marriage, adultery-committing, cocktailing employees – so much as they are being threatened with losing their jobs if they don’t put their mark on the Personal Lifestyle Statement. Organizers of the petition hope to gather 2,000 signatures before presenting it to the school, whose President Donald Dowless (photo) is likely to chuckle before finding some Bible verse to condemn the supporters of the liberal lifestyle. After all, he’s a big supporter of employee transparency and a code of conduct. Maybe more surprising than the loyalty oath from the conservative school, a pawn of the Georgia Baptist Convention, is that gay folks are already among its 200 or so employees. They are the ones concerned that the school will launch an anti-gay witch hunt. A gay, long-time employee anonymously expressed his concerns over the policy to the GA Voice:

”We now will live in fear that someone who doesn't like us personally or someone who has had a bad day will report that we've been drinking or that we are suspected of being gay," said the employee, who declined to reveal his name due to the policy.

How is such a policy possible today? Read through the comments of the stories here, here and here and you’ll wonder no more.