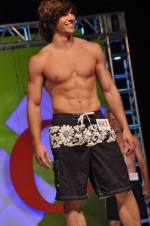 Untalented singer Tim Urban is all but off “American Idol.” We expected him to go home last Thursday, but he may be around an extra week now that shirtless pics have surfaced on the internet.

Urban (photos) was noticeably shocked himself when he didn’t get the boot on last week’s results show. After all, he only got on the show after another contestant was disqualified.

Thanks to voter response, it’s not “too late to ‘pologize” for this cutie who demolished One Republic’s hit on Wednesday’s Boys Night. We, and we imagine more than a few tween “Idol” fans, might forgive some of his vocal missteps now that we’ve seen these recently leaked swimsuit shots. 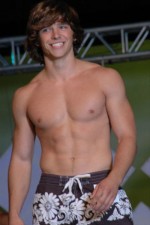 Hey, it’s early in the season, so why not kick off the less-adorable bad singers and keep the eye candy on screen an extra tick or two? That may not be a hope if this week goes as poorly onstage for Urban as the last round of the quick-and-dirty Top 24 eliminations.

Things slow back down to one-a-week eliminations when the Top 12 finalists are determined. They’re the ones who make up the meat of the season and get to perform in the “Idol” concert tour that follows. Maybe they’ll let Urban tag along as a roadie, providing he takes his shirt off when lugging amps and speakers.

We’re just glad Urban was around long enough for some enterprising young horndog to spread the news and views of his better um, talents.

Our Project ‘Idol’ recaps return Tuesday after Girls Night, and we’ll see how Urban and the rest of the guys do Wednesday, as well as on Thursday’s results show. In the meantime, enjoy the view.