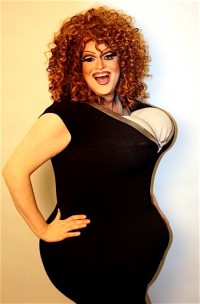 Even year-round performers seem to get more creative around Pride, and perhaps no event this week combines Halloween’s camp horror with gay culture more than Mary Edith Pitts (photo) in “Die, Mommie, Die,” this Tuesday through Thursday.

That’s right, Atlanta’s campiest camp drag queen takes the stage at Paris on Ponce in the title role made famous by none other than writer-actor Charles Busch. “Die Mommie Die” starts Tuesday and runs for three nights only at Paris on Ponce.

Busch’s off-Broadway smash made a lasting impression when he turned it into a film, with himself in the drag role of an aging pop star/screen siren just oozing old-Hollywood glamour, low morals, and a devious secret.

Set it all in a bad B Movie mood, soak it in attempted murder, throw in a movie-producer husband and a con man with a big-schlong cheating with “Mommie,” her bratty daughter and her gay son, and it’s a gay extravaganza.

In other words, it’s a perfect fit for Mary Edith Pitts. Which other local queen could play a role this over the top? Right–no one. The show also stars Preston Barrow and Tony Smithey.

Also look for a special appearance by the local burlesque troop Dames Aflame.