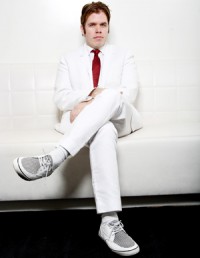 Gay blogger Perez Hilton (photo) is kinda fun to read for the latest dish on celebs. But if occasionally seeing the actual person on TV wasn’t bad enough, he’s now on a tour, which kicks off in Atlanta on Thursday at Variety Playhouse.

“The tour is like my baby who has been in gestation for several years now,” he tells Creative Loafing.

At least the Perez Hilton Presents tour is not just Hilton on stage for an excruciating set of his own. He is emceeing the show with some of his favorite musical acts in tow.

Expect performances by Ladyhawke, Ida Maria and Semi Precious Weapons. Hilton says these punk-pop, glam rock and dance performers go together because they’re upbeat so “people can get into it.”

While he will keep up with the original blog — he recently added CoCoPerez to his repertoire — and will also keep up the star-fucking and the general public disturbance, Hilton may be giving us a taste of what’s next for his career with this tour. His Perezcious Music label under the Warner Brothers umbrella is underway with one act, Sliimy, already signed.

Maybe the performers at Variety on Thursday are good. None of them are on the Perezcious label. And maybe it’s just us, but we have to ask the question: What makes Perez Hilton think we care about his taste in music?

Again, maybe he has a great ear for the next big thing, but with his track record as a self-promoting twit, how are we supposed know?