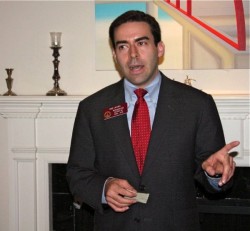 Legislation to toughen Georgia’s law against bullying in schools is expected to be signed into law Thursday during a ceremony at the Gold Dome in downtown Atlanta.

The legislation, which started as a proposal by gay-friendly Republican state Rep. Mike Jacobs (photo), was packaged into another bill once it failed to move forward on its own. Gov. Sonny Perdue, a Republican, is expected to sign the bill into law on Thursday. It passed the General Assembly in late April as the legislative session crawled to a close.

The family of Jaheem Herrera will be at the Georgia Capitol today to watch Gov. Sonny Perdue sign an anti-bullying bill into law.

“This is the first step in the long journey to end the terror that grips victims in the schoolhouse,” Herrera’s family said in a statement. “We applaud the governor and the fine lawmakers of the state of Georgia for hearing the cries of the innocent and oppressed victims of bullying. Jaheem’s memory will forever be known as the agent for change in Georgia classrooms.”

The legislation does not include specific protected categories in its definition of bullying. But it does offer a sweeping definition of bullying and mandates that local school systems develop anti-bullying policies by August 2011. It also directs the state Department of Education to develop a model policy about bullying by January 2011.

Georgia Equality, which called passage of the legislation a top priority, highlighted provisions of the anti-bullying legislation earlier this year:

• Provides for immediate notification of law enforcement when a student commits an alleged physical assault or battery on another student, teacher or other school employee

• Defines bullying as threats of injury, displays of force used to intimidate a victim, or written, verbal and physical acts, which a reasonable person would perceive as being intended to threaten, harass or intimidate