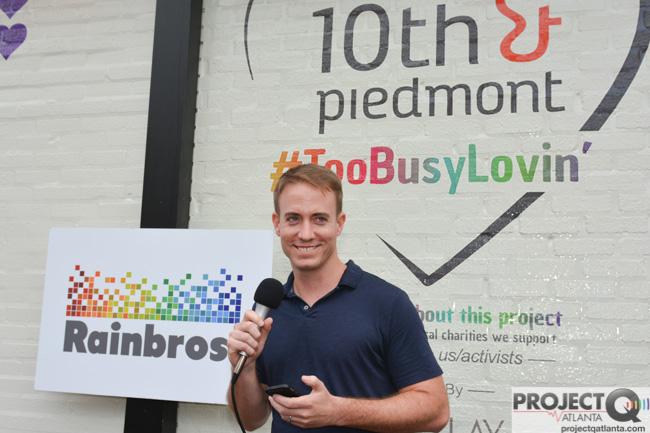 Three years after peer coaching organization Rainbros launched, the group is expanding its reach and changing its name to reflect more of LGBTQ Atlanta.

“As we started getting involved with more and more things early on, the brand raised questions about, ‘Can I participate in this,’” Yancey (top photo) told Project Q Atlanta. “That was obviously a significant flag that we needed to move with a rebrand faster than we planned.”

Organizers started working on the rebrand last July with a series of meetings with transgender people, lesbians and people of different racial identities. A big part of those discussions was deciding on the proper name.

“It’s looking for universally applicable words that people felt drawn to or not,” Yancey said. “One of the things we learned was that many people in the African-American community do not identify with the rainbow, which many of us weren’t aware of.”

“We’ve been learning as we go with what people need and what they respond to,” he added.

Once they settled on the new name Belong, the peer coaching program needed expanding.

“The biggest change is having dedicated coaching teams for the lesbian community and the transgender community” in addition to one for gay men, Yancey said.

When someone applies for coaching with Belong, they’ll be able to choose the sexual orientation or gender identity of their coach if they want to.

“If it’s something more relationship orientated, there might be a stronger preference for a certain type of coach,” Yancey said as an example.

Belong will also continue the social activities it was known for under Rainbros. Those include walk-and-talks, service projects, theater nights and potluck dinners.

The group hosts its spring meeting on Friday at Out Front Theatre Company to introduce the peer coaches and review the organization’s activities for the year. There will also be a panel discussion on unity in LGBTQ Atlanta.

Belong has organized a number of events since being founded in 2016. The group organized a rally in Midtown to support transgender people following President Donald Trump’s tweet about banning them from the military. It also hosted a forum for Atlanta mayoral candidates, created an art installation in Midtown to call attention to violence against trans people and hosted a public forum after a racism scandal at Burkhart’s.