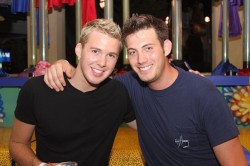 Hundreds — if not a few thousand — gay folks headed to Six Flags Over Georgia on Friday for the reincarnated Pearl Day, the rebirth of a longtime tradition that infuses the amusement park with a large dose of gay.

The weekend of events surrounding the trek to Six Flags winds down today with DJ Alyson Calagna at Opera.

But back to Friday: The evening transformed the Crystal Pistol into Club Pearl, a nightclub with music by DJ Bill Berdeaux. Entertainers including Kelly Rowland, Kristine W, Frenchie Davis and Junior Vasquez hit the stage later in the evening. 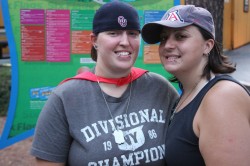 Pearl Day organizers named Atlanta Pride as a beneficiary for the event, with the group set to receive at least $5,000. The donation could reach $15,000 if attendance surpasses 15,000 people. Other beneficiaries include CHRIS Kids and Pets Are Loving Support.

A final tally on the crowd was not available over the weekend, though early after the 5 p.m. opening, park officials said 600 people were already inside. The park was staffed for a crowd up to 3,000 people.