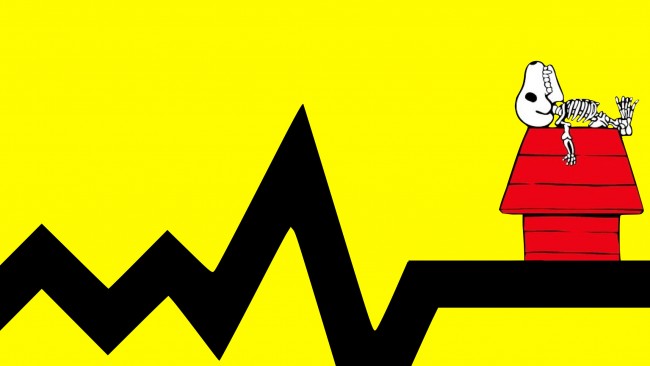 As part of its summer series of shows and events, Atlanta’s LGBTQ theater troupe presents a show ripe with modern issues like drug use, sexual abuse, suicide, eating disorders, teen violence, rebellion, sexual relationships and queer identities. And in a heady, touching move, the play sees its world through the eyes of beloved children’s characters in an unauthorized, but fully realized, parody.

Dog Sees God: Confessions of a Teenage Blockheadstages at Out Front Theatre in a limited run this weekend only, July 12 – 15. The characters of Charles M. Schultz are thinly veiled, and the creator himself even gets a role – as an unseen “god” called Pen Pal who signs letters “CS” (Charles Schultz).

In Dog Sees God, the beloved dog of main character CB (Charlie Brown) dies from rabies contracted after killing “a little yellow bird,” and CB begins to question the existence of an afterlife. His best friend, a pothead named Van (Linus), is too burnt out to provide any coherent speculation, and his sister (Sally) has gone goth.

CB’s depressed and angry ex-girlfriend (Lucy) has recently been institutionalized, and his other friends – including versions of a now-germaphobe and homophobe Pig Pen, party girl Peppermint Patty who touts being pretty and popular but is neither, bisexual sidekick Marcy and anorexic Frieda – are too inebriated to give him any sort of solace.

A chance meeting with artistic outcast Beethoven (Shroeder), the target of the group's bullying, offers CB peace of mind and sets in motion a friendship that will push teen angst to its limits.

It sounds like a lot, and it is. The use of familiar characters from our earlier, simpler lives ultimately packs an emotional punch that is far more than a novelty device.

Here’s a little rundown of the characters to look out for as plotlines and issues careen toward an ending that's haunting, but hopeful.

CB (Charlie Brown)is the main character in the play. He is intensely saddened over the death of his dog, and is forced to question both his sexuality, and his social status when he unwittingly falls for his classmate Beethoven.

CB's Sister (Sally) has gone goth, at least for a portion of the play. It is mentioned that, like her character basis, she changes her philosophy on life often. Her other personas during the course of the play are scripted as thug (called “gansta-bitch” in the script), and hippie.

Van (Linus), always the philosopher in childhood, is now a pothead with a worldview to match. He repeatedly attempts to pursue a sexual relationship with CB's Sister.

Matt (Pig-Pen) is a pathological germophobe whose dirtiness has been internalized – he's sex-obsessed and homophobic, and terrorizes Beethoven mercilessly. He is also a football player, and is CB's best friend.

Beethoven (Schroeder) became the school outcast prior to events in the play when it was revealed that he was sexually abused by his father. A bit of a recluse, Beethoven takes solace in playing the piano, but when he and CB become romantically involved, his world is turned upside down.

Tricia (Peppermint Patty), a party girl, who professes herself to be “pretty” and “popular.” Though never stated outright in the play, the general consensus is that her last name is York.

Van's Sister (Lucy) has been institutionalized for setting the Little Red-Haired Girl's hair on fire.

Frieda is the only original character to have her name kept the same. Although unseen, she is referred to numerous times as having an eating disorder; Tricia hates her and openly comments on her weight, while Van thinks that she's actually too skinny.

This preview originally appeared in Q magazine. Read the full issue below, and pick up a hard copy around town each week.