When “Dog Meets God: Confessions of a Teenage Blockhead” opens at Fabrefaction Theatre Company on Thursday, don’t look for the cuddly cartoon characters you know from Peanuts specials. The acclaimed dark comedy by Bert Royal has won raves off-Broadway by taking the beloved characters from the comic strip on an unauthorized trip to their angst-ridden teens (top photo) —with some major issues in tow. When "CB's" dog dies from rabies after eating a "little yellow bird," CB (Jeff Martin, bottom photo) questions the existence of an afterlife. His best friend is too burnt out to provide any coherent speculation; his sister has gone goth; his ex-girlfriend has recently been institutionalized; and his other friends are too inebriated to give him any sort of solace. Yes, the Atlanta theater troupe that in December brought something personal to Atlanta's last-chance "Rent," isn’t afraid to go there. Or to the place where CB realizes he’s gay and “Beethoven”--Schroeder, anyone?--is assumed to be gay but turns out straight. 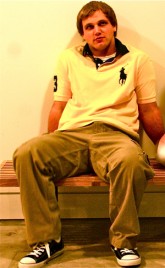 “The concept of sexual identity is thoroughly examined in this play, and the ending is very poignant,” says Amelia Smith-Fazio, Fabrefaction’s director of marketing. True to the title, an encounter with a bullied classmate provides CB a new perspective and sets in motion an existential journey. Drug use, suicide, eating disorders, teen violence, rebellion and sexual orientation collide and careen toward an ending that's both haunting and hopeful, she says. “Dog Sees God” won the New York International Fringe Festival’s Best Overall Production, as well as Theatermania’s Play Award of 2004, a GLAAD Media Award for Best Off-Off-Broadway production, and the 2006 HX Award for Best Play. “This play was carefully chosen to be the first contemporary drama in our inaugural season because of the message,” says Christina Hoff, the troupe’s artistic director, in a prepared statement. “The message to maintain in your heart all that makes you who you are reminds us that the only way to accept others is to first accept ourselves,” Hoff continues. “In light of the repeal of DADT and recent suicides that have rattled our nation, the characters in the show and its message have only become more personal and vital.” Local director Michael Tarver agrees that the message and the timing are key. “Sometimes the world at large needs to be reminded of a simple fact, and as artists it is our job to be that reminder,” he says. “Now, more than ever, we need to remind ourselves of one simple fact: It gets better.” “Dog Sees God: Confessions of a Teenage Blockhead” opens Feb. 24 and runs Thursdays through Sundays until March 13. Buy tickets online or call 404-876-9468.