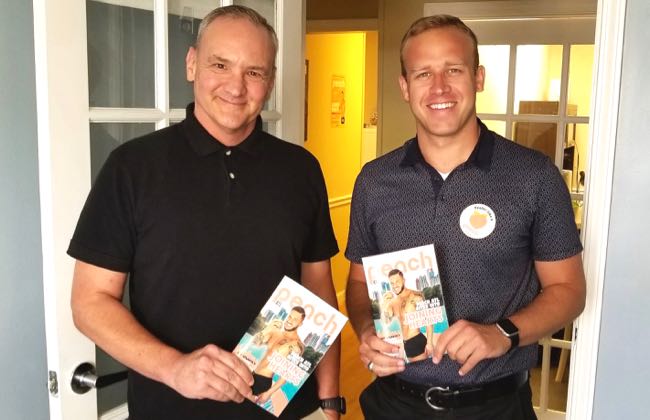 After nearly two decades of chronicling gay Atlanta nightlife, David magazine has shuttered operations, and some of its former staff formed a fresh upstart Peach ATL magazine debuted on Wednesday.

Some of the same LGBT publishing veterans that have hatched the weekly print edition of David for years picked themselves up and dusted themselves off to launch Peach ATL. The 64-page inaugural issue landed at distribution spots with a juicy cover hunk, profiles of favorite bartenders and a preview of the Joining Hearts main event.

So we talked with Peach ATL Publishers Mike Fleming (photo left) and William Duffee-Braun (right) about the new publication, what happened to David Atlanta, and that juicy peach emoji logo.

We get Peach and the tie to Georgia. But why that name for the new magazine?

When we were discussing names, we wanted the name to be immediately recognizable, and to be both as sexy as our cover guy Peach of the Week as it is a connection for us and our readers to our thriving city.

That peach emoji! Tell us the story behind that juicy logo.

Yes! Thank you for noticing our fuzzy peaches! Can you believe a few people thought we hadn’t made the connection between our peach icon and the use of the peach emoji as a big fat bottom? We get it guys, we thought it through, and we want you to squeeze it!

In all seriousness, we wanted a name that was going to last a lifetime in Atlanta, but also have the iconic image be something that’s very “right now” in the zeitgeist of gay culture. Of all the names we considered, this one ticked all the boxes.

David Magazine was around for nearly 20 years. Other than a brief respite in 2009 when a former owner went bankrupt, the weekly magazine has been publishing since 1998. What happened?

It’s bittersweet for us as former employees as well. Our staff has a combined 54 years experience in LGBT Atlanta media, and for some of us the bulk of it was spent under that name and its widely variant owners. We loved those years. We helped create some of the best of them.

When the most recent owner, David Thompson, decided to cease publication as the David name's fourth owner in 19 years, we had already come to the conclusion that Atlanta deserved a fresh start from all that baggage, good and bad. We also heard that continuing to operate under the name, which was named after the Statue of David in the Renaissance-loving, circuit-centered 1990s, was too milquetoast and stereotypical for today’s audience.

David carved out a niche of nightlife, entertainment and lifestyle. What is the focus of Peach? What new things are in store for the magazine?

As we told readers of our inaugural issue, Peach ATL is like a great remix. Much of the song remains the same, all the best hooks are there, and there’s an unmistakable new energy. We also hear readers loud and clear who formed an opinion of the magazine during temporary but tenuous circumstances in its history, including a lack of diversity or an unnecessarily oversexed aesthetic. We will take this opportunity to address those concerns.

We’ve been joking that our staff is like a queen of long standing in the community – it’s us, but with a new face.

What statement does the inaugural issue make?

We’re here, we’re queer, and we embrace parties, but also the personal and the political. The content and the advertisers in the first issue are just the tip of the iceberg. We are already knee-deep in our second issue and have much of the third one all planned out.

Peach has a staff of veterans from other LGBT publications, including David. How did the Peach team come together and how will that mix of experience and backgrounds help going forward?

Frankly, it means that we know what we’re doing. Our senior advertising representative has been doing this since 1998. One of our publishers has been in media 30 years and in gay media for 19 years; the other is going on a decade of magazine brand development that includes being personally responsible for putting Fenuxe on the map and bringing David Atlanta back from certain doom. Our Art Director is a SCAD-trained, genius-level design talent. Our mix of skills approaches the magazine business from every angle.

It's a tough environment for print publications and any publication, what with competing with social media and the latest tech fads producing content. How does Peach stand out and succeed?

As we’ve discussed, the one-word answer is experience. The longer answer is that we are survivors, and our passion for this industry means that we are always studying and learning, then bobbing and weaving to make adjustments as the audience, technology, and the world around us change.

Once that meant sharing the exact same thing online as in print. Now it’s so much more. We see you Facebook, Twitter, Instagram, and Snapchat, and Peach ATL is all over it. @peachatlmag on all platforms.

Two veterans of local LGBT publishing own Peach ATL. What's your vision for the new magazine?

We have talked about this a lot. We want to provide a mirror on gay Atlanta for readers, a window into gay Atlanta for the outside world, and a direct line to gay Atlanta for our advertisers. How that’s done is by being active participants in our community and reflecting what we see and hear back to them.

How have readers reacted to the shuttering of David and the launch of Peach?

It’s been overwhelmingly positive, and we are so grateful for that. We were confident in our idea, but still wrung our hands over the worst-case scenarios. Without exception, both advertisers and readers have been excited to hear what we’re doing and glad they’ll still have a weekly resource.

Sure, there were one per every 1,000 comments from disgruntled past employees of other companies and gossip queens, but we won’t conduct our business losing sleep over that. People will talk, and gay people will talk more. We aim to prove the naysayers wrong over time and celebrate with those who like what they see.