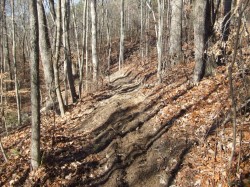 Among the amenities of Mt. Tabor Park in Paulding County are tennis courts, athletic fields and a walking trail. It’s the latter that’s causing some problems for men who cruise for gay sex outdoors.

Paulding County sheriff’s deputies have arrested five men since April in an ongoing sting operation at the park, an effort launched after police say they received complaints about the outdoor activities. Charges have ranged from solicitation for sodomy to sexual battery to public indecency, according to WSB Radio.

“During that time, they made several arrests, several encounters with individuals that were known to be coming to that location looking for illicit sexual activities with strangers,” said Gurley.

“This was a noticeable problem in our park that we felt we needed to take action on and restore the family environment that you should come to expect in a park like that,” said Cpl. Brandon Gurley.

Last summer, the same police agency in the suburb west of Atlanta went cruising on Craigslist to set up public sex meetings with men on the Silver Comet Trail. When the tricks arrived, they were arrested.

With the latest daytime sting, police complained that more men would have been arrested but they left after spotting deputies.