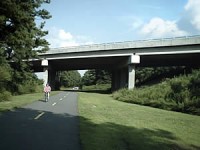 “Blow and go” in Paulding County doesn’t quite mean what the gay boys are used to.

The phrase — a popular one on gay cruising sites such as Craigslist and Manhunt — means what you think it does: Stop by for sex and then get out. Quickly, preferably without a lot of small talk.

In Paulding, a conservative suburb west of Atlanta, it now means this: Try to blow outdoors and you go to jail.

Sheriff’s deputies there, apparently without much else to do, now cruise Craigslist to set up public sex outdoors with gay men. Except that when the unsuspecting gay guy shows up for the meet, undercover deputies slap on the handcuffs and pile on the charges, including solicitation of sodomy and prowling. How rude.

That’s what happened Thursday, according to the Atlanta Journal-Constitution.

Sheriff’s deputies responded to an online ad posted about two weeks ago seeking to engage in sexual activity at a location on the trail.

An undercover deputy and the alleged online poster met around 9 p.m. Thursday, the Paulding County sheriff’s office said in a release.

Authorities in Paulding are apparently trying to tamp down public sex on the Silver Comet Trail. No harm in that.

But do sheriff’s deputies really need to spend time entrapping gay men who want to get it on outdoors? Uniformed deputies in marked patrol cars visible on the trail might be a more effective deterrent than cruising online classifieds. That might even deter actual criminals who want to rob, pillage and murder passersby.

A quick search of the Men Seeking Men ads on the Atlanta site for Craigslist shows three ads for sex on the Silver Comet Trail, hardly an epidemic for a 61-mile trail that extends through three counties. This one is from June 1 and seem to fit the details of the recent arrest:

If any of you hot cycling studs are gonna be out there in the heat on Tuesday, drop me a line and tell me so and I’ll watch for you or meet up with you.

I’m an above-average pedaler but not about to push it into the gung-ho zone in near-90 heat. Probably will ride 15 or 20 miles, stop and have lunch, ride back.

On the bicycle, we can discuss cycling, politics, or hot sex and do one or two of those Tuesday.

We can all appreciate a man in uniform. But this is a little much.