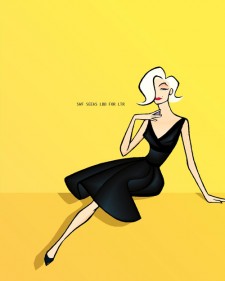 A former Disney artist and graphic designer whose sassy series of artwork has made a splash in gay Atlanta for quite some time now, Paul Wolski exhibits new work for a Wednesday cocktail benefit.

“We just wanted to pull out all the stops and have the event fit the attitude of the art,” Wolski says. “After a hiatus, I’ve been dusting off former works and given them a new energy – remixing them, you could say – and I feel like over time, my approach and technique have changed to make you look at them in new ways.”

Wednesday’s event at Chic Gallery in Phipps Plaza also finds entirely new Alter Egos among the more than 30 pieces on display. And as a special treat, hostess with the mostest, EJ Aviance will wear an original costume created especially for the event that brings one of the pieces in the show to life.

“Lately, I’ve been really focusing on making powerful statements with a strong, dominant color theme,” Wolski says. “You’ll see distinct bursts of color throughout this show that make a strong statement, as well as a whole new cast of characters.”

Wolski is also introducing a new concept that brings the large pieces he’s known for down to size, adds even more whimsy to his concept, and may be that perfect gift for you or someone else this year.

“I call them Alter Ego Pop Blocks,” the artist says. “These are 10” x10” cropped Alter Egos inset into wooden black box frame. You can hang them, stack them, use them as bookends, and build a collection over time. It’s the adult version of playing with blocks.”

To top it all off, the evening benefits the Pancreatic Cancer Action Network. Wolski also created a special Alter Ego that takes his popular red ribbon design and turns it purple to specifically benefit the cause.

“Come prepared to have a great time,” Wolski says. “It’ll be a diverse crowd full of energy and surprises.”