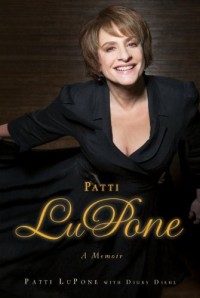 Patti LuPone was the original “Evita” on Broadway, originated the role of Fantine in “Les Misérables” and redefined the iconic stage mother Rose in “Gypsy.” In other words, she’s musical theater royalty.

LuPone signs her eponymous memoir (photo) on Monday at at Agnes Scott College. She’s only making four appearances to promote the book, and Atlanta snagged the only one where she’ll actually be speaking, or in this case being interviewed on stage by yours truly.

I love theater, but I’m not a huge fan of musicals – unless LuPone is involved. With apologies to Madonna, Elaine Paige and anyone else who has played Eva Peron, they simply pale in comparison to LuPone. Listen to her on the original London cast recording of “Sunset Boulevard,” and even Glenn Close also falls by the wayside.

LuPone has a reputation for being opinionated, mercurial and difficult, and she’s not afraid to admit it in her memoir. She’s had a run-in with nearly every actor, director and producer in the world, and yet they still want to work with her. Even after Andrew Lloyd Webber fired her from “Sunset Boulevard,” he toyed with the idea of asking her to appear in another show.

In two long chapters, LuPone goes deep into the debacle of “Sunset Boulevard,” how Webber undermined the show by allowing Barbara Streisand to record the show’s big songs before the musical even opened; casting Close in a competing version in Los Angeles; inviting New York critics to the London previews before the show was ready; and then, in an uber-douche move, firing LuPone before the show transferred to Broadway after the US critics drubbed the London show.

The backstage dish makes up the bulk of the memoir, but LuPone is also a fierce advocate for actors, especially when it comes to working conditions and salary. Although she’s won two Tony Awards, an Olivier Award and was nominated for a raft of others, she’s refreshingly pissed off when she loses (especially for her role in the revival of “Anything Goes” on Broadway).

But when LuPone loves and admires a fellow collaborator, she is lavish in her praise and thanks for helping her to hone her craft. When she doesn’t love you, she pulls no punches in calling the offender an asshole. She has particular venom for Bill Smitrovich, her onscreen husband in the hit TV series “Life Goes On,” who she only spoke to when they were doing a scene.

LuPone has an Atlanta connection, too. She played Florine Worthen, Boolie’s clotheshorse wife, in the film version of “Driving Miss Daisy,” written by Atlanta native Alfred Uhry. It was Uhry who gave LuPone one of her first big breaks, when she was cast in his musical, “The Robber Bridegroom.”

Welcome back to Atlanta, Miss LuPone.

Collin Kelley is a poet, Atlanta-based journalist and author of the novel “Conquering Venus.” Follow him on the Modern Confessional blog at collinkelley.com.