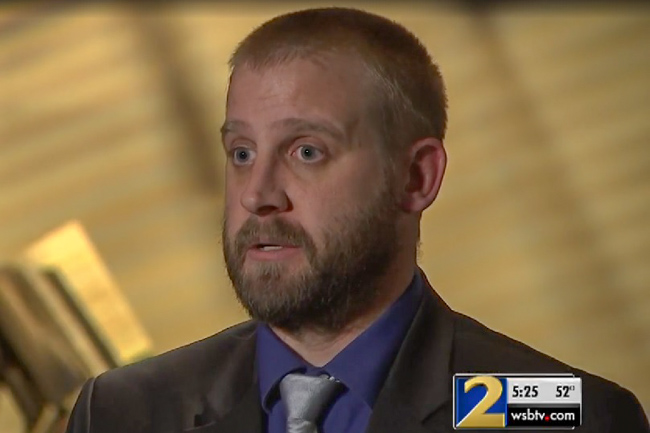 The pastor of a Norcross church preaches that gay people should get the death penalty and that using the correct pronouns for transgender people is “disgusting” and “perverted.”

A WSB-TV viewer tipped the station off about Strong Hold Baptist Church after seeing one of Pastor David Berzins’ sermons on YouTube titled “Shame on Atlanta Pride and its Supporters.”

“There are a bunch of pedophiles, perverts, rebrobate, wicked, vile people walking, marching up and down the streets of Atlanta with their fag flags out and just out and proud in your face,” Berzins said.

He then reads off a list of businesses, politicians, churches and other Pride parade participants “to be named and shamed.”

Strong Hold Baptist Church operates in a Gwinnett County-owned building in a strip mall near Jimmy Carter Boulevard, according to WSB-TV.

Berzins moved from Arizona to Atlanta last June because he “saw a great need for a new church plant in the Atlanta area,” according to the church’s website.

Berzins defended his beliefs to WSB-TV.

“No one is going to prevent me from preaching the word unless they kill me,” he said.

UPDATE | Jamie Fergerson, executive director of the Atlanta Pride Committee, told Project Q that they were “saddened and repulsed” by Berzins' comments.

“The Atlanta Pride Committee is saddened and repulsed by the content of David Berzins' video referencing the Atlanta Pride Festival and Parade. Atlanta Pride is a 49-year-old observance of the LGBTQ community's movement towards equal rights, dignity and well-being for all people — values that are not shared in hate speech like that captured in this video. We believe that transgender and gender diverse people deserve to have their names and pronouns respected and that our participants and supporters deserve the safe space in which we celebrate the diversity and history of our community. We are further concerned that Berzin was allowed to call for the eradication of members of our community in government-owned building, a place where all individuals should be safe and free from threat of hate speech.

Views like the ones expressed in this video have a detrimental impact on the well-being of many LGBTQ individuals and contribute to problems such as the prevalence of queer youth living on the streets, bullying, depression, suicide and underemployment — especially for the most vulnerable or marginalized LGBTQ people. We recognize that not all faith traditions — including many included in the Atlanta Pride celebration — share these views, and we encourage individuals to seek out inclusive communities and services for support as needed. Finally, we know that the Pride movement along with the number of people who identify as a part of gender and sexually diverse communities is growing and that more and more people are supportive of equal rights every day. We are grateful to play a part in moving Atlanta and our country forward in the movement for justice, and we recommit ourselves to that work until our vision is achieved.”