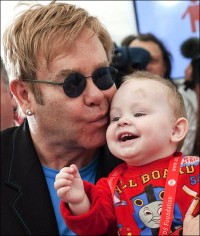 Madonna isn’t the only celeb in Britain who likes to take home foreign babies. Sir Elton John wants one, too., even if he’ll be 81 when the kid turns 18.

It’s not just a weird dream after too much Ukrainian Vodka. It may soon be possible to wander through Phipps Plaza and see Elton and husband David Furnish pushing a baby stroller on their infrequent visits to their Atlanta home away from home.

As if! At their age, the guys have a pretty steep hill to climb to get an adoption approved by the British government, but a Ukrainian baby named Lev “stole Elton’s heart” on a recent tour stop at an orphanage with his AIDS Foundation, the Times of London reports.

Check out the Associated Press video:

This from the same man who said he would never adopt because he didn’t want “to breast feed.” Silly queen, uh, knight. Whatever.

If Madonna had issues getting her Malawain accessory approved, John and Furnish might have an even harder row to tow. For them, it’s about their ages. Apparently, the British government’s rule of thumb is that the prospective parent should not be past retirement age when the child would turn 18. Even Elton’s elevated status can’t change the fact that he’s 63. Perhaps they’ll rely on Furnish, who will be 62 when the kid hits 18.

Whether they’ll ever see the kid and just leave him to nannies, much less bring him along when they visit their home in Atlanta, is in question. Take a closer look at the photo; Elton doesn’t seem completely comfortable. Just sayin’.