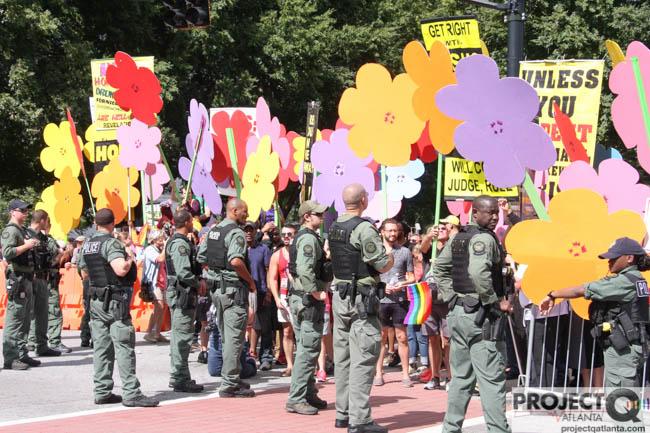 The large pansies of the Pansy Patrol – the organization that uses its flower power to combat the evil of volatile anti-LGBT protesters during Atlanta Pride – is being honored for its peaceful, simple and yet powerful work.

The organization is one of several being honored on Saturday during the 30th Annual HRC Atlanta Gala Dinner & Auction. The Pansy Patrol will receive the Dan Bradley Humanitarian Award for its efforts year after year to block, quiet and counter anti-gay protesters during the Pride parade.

“The Pansy Patrol has worked diligently to strip power from offensive protesters, naysayers and hateful voices at large events such as the annual Atlanta Pride Parade and marches and rallies to support the transgender community,” Ryan Roche, 2017 Gala & Auction Co-Chair, said in a prepared statement.

“TPP is a lighthearted, but effective, way to make the LGBTQ community feel safe during times of celebration and gatherings for progress and change,” Roche added.

The Pansy Patrol originated in 2013 as volunteers and their large flower creations followed anti-LGBT protesters along the Atlanta Pride parade and blocked their hateful signs with ones of their own containing messages such as “Love conquers hate,” “God adores you” and “PFLAG loves everyone.”

Since then, Pansy Patrol has blossomed into a Pride tradition, bringing its brigade to the intersection of 10th and Peachtree streets where large numbers of protesters gather to harass parade participants, the LGBT crowd and companies that take part in the march. In the last two years, the anti-gay protesters have clashed with police and the crowd, and in 2015 a group broke free from barricades and halted the parade as they marched along 10th Street.

Throughout, the Pansy Patrol has been there to frustrate the protesters and block their signs that contain anti-gay and racist messages.

“In 2013, we came up with the idea to create giant colorful pansies as an artistic expression to involve, educate and energize the public in the best and most positive way possible,” Thom Baker and Don Purcell, co-founders of the Pansy Patrol, said in a prepared statement.

“We, along with all of TPP’s volunteers, are so humbled to accept this award,” they added.

Bradley, a native Georgian and Mercer University graduate, helped launch the Human Rights Campaign Fund in 1980 and continued years of LGBT activism before his death in 1988 at the age of 47.