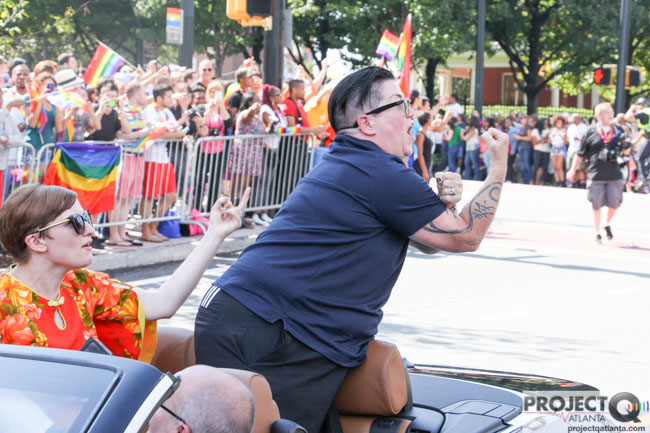 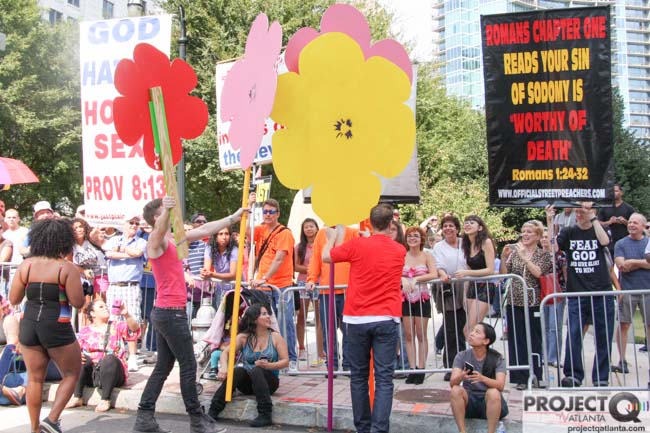 A band of street preachers armed with a megaphone and anti-gay signs tried to shout down and shame the Atlanta Pride parade on Sunday, but were met with pansies, angels and Lea DeLaria giving them the finger.

The group of about a dozen protesters, stationed at the intersection of 10th and Peachtree streets, shouted anti-gay slurs, harassed parade attendees and tried to shame companies in the parade. The leader of the pack was Ruben Israel, a Los Angeles man who operates Official Street Preachers. He is also affiliated with Southeast Open Air Preachers Association, according to Joe My God. He was joined by Angela Cummings, whose website says she is president of Highways & Hedges Ministries. She posted several videos of their antics at Atlanta Pride.

But they were countered by the Pansy Patrol, who blocked the view of protesters with their own large flowers to the cheers of spectators (video below) – just like they did last year. Later, Angel Action Atlanta stepped out form their spot in the parade to spread their wings in front of the protesters and drew cheers from the crowd.

Throughout the nearly two-hour parade, the protesters were greeted with reactions from dykes on bikes, a leather daddy who shook his ass at them and comedian Lea DeLaria, an honorary parade grand marshal. She became visibly angry when she spotted them, screamed at them and gave them the finger – with both hands. During her Pride appearance on Sunday evening, DeLaria addressed them from the stage.

“Can you believe those assholes showed up at Pride,” DeLaria said (video below).

The protesters also clashed with Atlanta police, who dispatched additional officers to monitor them and their sometimes tense confrontations with Pride-goers. At one point, a handful of police motorcycles –sirens blazing – pushed back the protestors and counter-protestors by driving within inches of them.