Panel: ‘Shut the ‘F’ up’ part of Eagle raid abuse 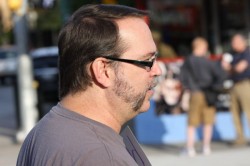 If you’re an Eagle patron ensnared in the Sept. 10 raid, “Shut the ‘F’ up” is a familiar refrain. Sadly, it’s not enough to punish rogue cops. That’s the lesson that came from a fractured Atlanta Citizen Review Board on Thursday.

The panel, in its continuing effort to sort through the scores of citizen complaints filed in the wake of the gay bar raid by the Atlanta Police Department, overruled its staff and sustained allegations of abusive, anti-gay and racist language by police that patrons of the bar were almost unanimous in voicing – at least after they were uncuffed and allowed to stand up.

But because the people who complained of the misbehavior by cops, including Eagle co-owner Robert Kelley (photo), couldn’t finger specific officers, the board didn’t dish out any punishments. Instead, according to media reports, they opted to wait on issuing sanctions until they complete a larger investigation into police conduct into the raid.

Both the GA Voice and WABE had a blow-by-blow account of Thursday’s board meeting, at least the second time the panel took up complaints stemming from the Eagle raid. In June, the board recommended sanctions against two officers involved in the raid and sustained a complaint that one of the men was falsely arrested; police Chief George Turner has taken no action on the sanctions. 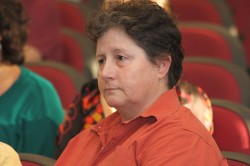 The board went against the staff’s recommendation to not sustain the allegations made by Atlanta Eagle co-owner Robby Kelley and doorman Ernest Buehl. CRB Executive Director Cris Beamud said that because the staff’s investigation could not identify specific officers using the abusive language, as required by the board’s policy, it could not recommend upholding the allegations.

Board members, however, said it was apparent abusive language was used because of the number of patrons in the raid who have said so.

“I disagree with the recommendations of the staff. Irrespective if they can’t identify any officers, there was an overwhelming sense of oppression and entitlement to abuse people,” said board member Roderick Edmond. “I believe there was abuse suffered by everyone there.”

Joy Morrissey, who chairs the citizen panel, says the board ultimately felt the officers’ conduct was abusive and should be treated as such, even if patrons couldn’t identify them by name.

“To have that type of behavior against patrons of a bar is ridiculous. It doesn’t matter whether it’s a straight bar or a gay bar,” Morrissey said.

As consistent as bar patrons were in insisting police overstepped their bounds during the raid, some two-dozen officers interviewed by the board were as consistent in saying they didn’t utter an offensive word. The board, though, did say that once they’ve completed their work that supervisors of the raid should receive the harshest recommendations of punishment. Two of the four supervisors at the raid — Sgt. John Brock and Det. Bennie Bridges — were behind the botched trial of the Eagle 8 that resulted in most of the charges being dropped or the men being found not guilty.

For its part, APD had little to say in reaction to Thursday’s actions by the board.

“The case is in litigation,” Carlos Campos, the police department’s public affairs manager, says in a prepared statement. “Also, it’s important to allow the Citizen Review Board to do its job. As a result, the APD will respond to the allegations in the proper forum, at the proper time.”

Eagle patrons at the time of the raid later filed a federal lawsuit against the city and its police department. The agency’s own internal probe into the raid has finished its investigative phase and is continuing, Campos says.