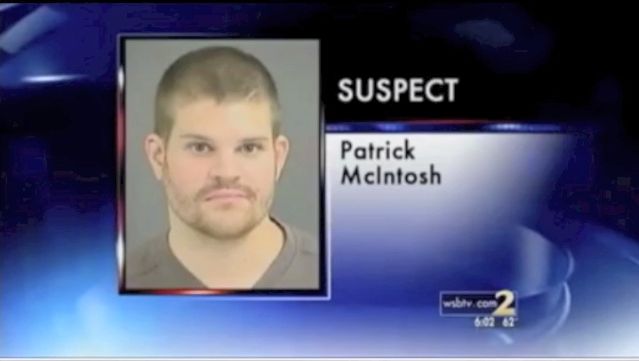 A man stocked with weapons and ammunition arrested after allegedly threatening to shoot up an Atlanta club over a gay spoof video has prior arrests in two states for stalking and wanted to perform comedy in a panda suit.

New details about the case against Patrick Randell McIntosh are included in a criminal complaint filed after his Nov. 30 arrest at his mother’s home in Charleston, S.C. He’s charged with receiving a firearm and ammunition while under indictment and threatening the life of the president.

McIntosh came under scrutiny by federal law enforcement officials from the FBI, ATF and Secret Service after he allegedly threatened to “shoot everyone” inside Laughing Skull Lounge, a gay-friendly comedy club on Peachtree Street. McIntosh apparently made the threat through the Facebook account of Pand Atl as he shared a Project Q Atlanta post about a gay spoof video created by gay comedian Ian Aber and the comics of Laughing Skull.

Other posts include a longer one, no longer visible, with an anti-gay, racist rant that threatened the president. Posts still visible on Panda Atl’s page include a Nov. 17 status that says, “I wanna kill myself,” a Sept. 29 missive asking if anyone wants “to butt fuck a guy in a panda suit” and posts in August mocking transgender women.

“Other demeaning statements were made about homosexuals as well as claims of ‘White Power,’” according to the federal complaint. “Another post made by the profile creator stated that, ‘NEGROS in the White House. Think they own the county. Assignation the President!!!!!!! He needs to dye… his suits purples.”

After the threat against the comedy club, a manager for Laughing Skull contacted Atlanta police, which filed an incident report classifying the matter as a terroristic threat. Atlanta police also notified one of its LGBT liaisons about the case.

Before the threat against Laughing Skull, McIntosh apparently tried to perform at the club during an open mic night. But a manager says his comedy was “a bit off,” according to the criminal complaint filed Dec. 7. McIntosh also wanted to perform in a panda suit.

Other highlights of the 15-page criminal complaint against McIntosh:

• Atlanta police linked an email address used by McIntosh to the Pand Atl page on Facebook. Images on that page of a man dressed in a panda suit appear to be taken at Shelter Nightclub in Atlanta. That club says it wouldn’t hire McIntosh as a promoter “because he appeared too mentally unstable and, on occasions, he had verbally abusive outbursts at other patrons and members of his staff.”

• Gwinnett County Sheriff’s deputies arrested McIntosh on Oct. 4 on a charge of stalking. The arrest was for a Fulton County warrant filed by McIntosh’s former girlfriend.

• Gwinnett sheriff’s deputies staked out Inn Town Suites on Buford Highway in Norcross after McIntosh’s former girlfriend told him he was staying there. When deputies saw curtains move inside McIntosh’s room, they pounced and found a shotgun, two handguns under the bed, ammunition, a Taser and several holsters inside the room. McIntosh wasn’t there; the curtains were in another room.

• Gwinnett deputies returned to their vehicles and McIntosh eventually arrived. They arrested him and found ammunition inside the Dodge mini-van he was driving.

• On Oct. 3, McIntosh emailed his former girlfriend telling her that he still loves her, that “I ain’t giving up til I am dead” and that he was making plans to be killed by police if arrested.

• In March, McIntosh was arrested in Charleston for stalking and was released on March 23 on $50,000 bond. Conditions of his bond required that he surrender all of his weapons. His attorney delivered one to police three days later. McIntosh was indicted on a stalking charge on June 7.

• On Aug. 24, McIntosh allegedly emailed a crime analyst with the Charleston Police Department posing as a Facebook user that, “I challenge you to a dual. I wish to cause harm to you and your immediate family. I wanna kill the president of the united states.” Police established the Facebook account to “monitor the online ‘rants’ of McIntosh.”

• McIntosh followed his former girlfriend to Atlanta and moved into the Norcross hotel on June 11 and returned to South Carolina on Oct. 8, after his release from the Fulton County Jail.

McIntosh’s Pand Atl profile includes a cover image of a person in a panda suit mockingly humping a man, other photos of someone dressed in a panda suit, and Nazi imagery. The Facebook profile says Panda Atl is single and interested in men. It lists 31 friends, including several LGBT Atlantans, artists and drag queens. Those friends include Dylan Michael, Destiny Brooks, Violet Chachki, Lauren LaMasters, Kellie Divine, Angelica D’Paige and Kyra Mora.