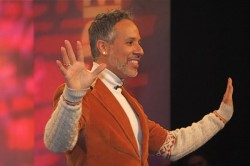 Supporters of Pets Are Loving Support take note: There are two ways you can help the non-profit this weekend with its mission of providing care and food to the four-legged friends of critically-ill people.

On Sunday, you can fork over $20 and attend the 2010 Pet Cotillion. The fundraiser includes a silent auction, music from DJ Greg Mosley and the unveiling of the organization’s new spokespet. You can vote for one of the 21 candidates through Saturday on the PALS website.

Each vote costs $1 and helps organizers of the Pet Cotillion work toward their goal of raising $13,000 through the event, says Kevin Bryant, PALS’ executive director.

“This helps carries us through the lean summer vacation months when there isn’t much going except for bingo,” Bryant says. “The money raised goes to support the veterinary care of the pet companions of our clients.”

Sunday’s event also helps raise the profile of PALS as the owners of each pet in the running for spokespet encourages their supporters to visit the group’s website to vote. It’s there that they can learn more about the PALS mission, Bryant says.

And once a day for the next 10 days, you can vote for E. Vincent Martinez (photo), a PALS board member and the fashionista behind the popular Doggies on the Catwalk each winter. The event draws local celebs, pairs them with their pets and walks them down the runway with outfits designed by the students of Grady High School’s UrbanCouture program, which Martinez founded, to raise funds for PALS.

Now, Martinez is taking part in a contest that could bring $2,500 to PALS. He’s one of 15 influencers taking part in the Cadillac of Test Drives, a purely promotional effort by the upscale brand that has local notables blogging about their cruising in the slick autos. As they blog, Martinez and others are also stumping for votes. The one who garners the highest tally wins money for their designated charity. Martinez will donate the $2,500 prize to PALS.

In addition to his Cadillac blog, Martinez also created a Facebook page to track his efforts.

On Tuesday, Martinez blogged about taking his red Classic Cadillac on a food delivery run for PALS.

It was very important that my first official stop in the Classic Cadillac Test Drive would be to make a food delivery for Pets Are Loving Support, PALS. I’ve had a lot of fun serving on the Board of Directors. There are events, parties, bingo, Rubbing Noses and Doggies on the Catwalk. Fundraising has a definite fun element to it, but every once in a while, its good to step back and reflect on your cause(s). I wanted to experience something different and deeper which was why I chose to make a food delivery and meet one of the clients we serve. And their pet!

Martinez, who had more than 1,020 votes on Friday, is competing against some of the same people who joined him at Doggies on the Catwalk in January, including Holly Firfer (368 votes) and Frank Ski (138 votes). You can vote for Martinez once a day for 10 more days.

You can also join PALS for its monthly bingo fundraiser, which is set for May 12.