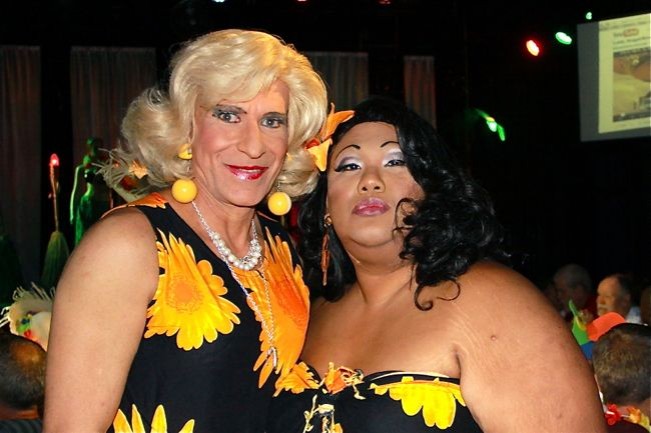 There are few gay Atlanta events with more staying power than PALS Bingo, the monthly game that called the balls on Wednesday with a Hawaiian theme for Pets Are Loving Support at Jungle.

July’s game got lei’d with floral shirts, grass skirts and scary patterns that should only be reserved for occasions like “Luau” bingo. As usual, co-hosts Bubba D. Licious (top photo, left) and Amber Divine kept the bingo balls spinning and the dobbers dobbing as they interacted with the crowd and cracked jokes.

Besides the drag guests stars, one coconut-bra wearing hunk got a lot of attention up his grass skirt (second photo), and pretty much everyone – gay and straight, young and old – found a way to make the theme work for them and the cause.

PALS has had a busy, fruitful and fun year so far. In addition to its monthly Bingo games, like May’s Alabama Prom Night Bingo (photos), Pajama Party Bingo (photos) in April, the organization benefited from Doggies on the Catwalk early this year and crowned its 2011 Spokespet during the annual PALS Pet Cotillion (photos).

Next up is PALS “Emerald City – Back to Oz” Bingo on Aug. 10. Before that, Sherry Vine’s Cabaret at Jungle on Saturday, July 16 also benefits PALS.