PALS Bingo proms it up in this trailer [photos] 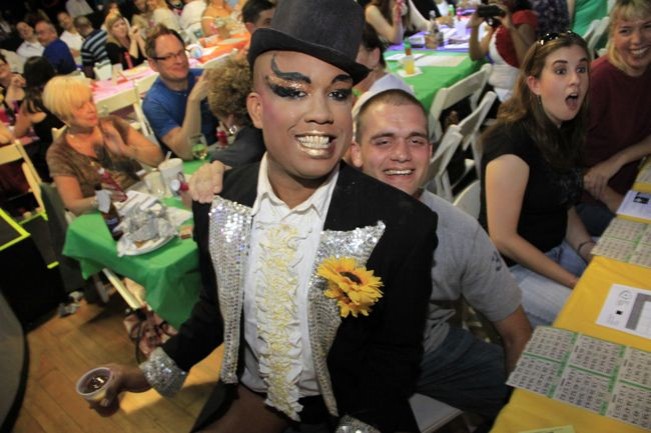 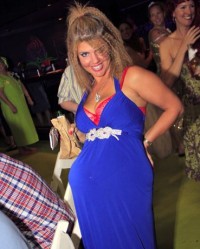 Pregnant prom queens, tacky tuxes and general trailer parodies made Wednesday’s PALS Bingo memorable. The monthly game with a theme and a heart applied its magic to “Alabama Prom Night” for May.

As always, the gay-favorite bingo night at Jungle benefited Pets Are Loving Support and its ongoing programs to help critically ill people keep and care for their pets. And like clockwork, longtime drag hostess Bubba D. Licious was there as a trailer park mess in a dress to emcee the game and the surrounding festivities. This month, she was joined by Brent Star (top photo) at the mic.

Half the fun at PALS Bingo is helping the cause, and the other half has to be dressing the theme, and Wednesday’s crowd didn’t hold back. Stars fell on the “Alabama”-inspired hand-me-down prom dresses and rhinestone crowns, wife-beater undershirts and trucker hats.

One woman crimped her hair and made like she was pregnant (second photo), and a man even showed up with a fake baby in tow. All in good fun, mind you, because teen pregnancy is bad. Ahem.

PALS has had a busy, fruitful and fun year so far. In addition to its monthly Bingo games, like April’s Pajama Party Bingo (photos) and March’s Mardi Gras-themed game (photos), the organization benefited from Doggies on the Catwalk early this year and crowned its 2011 Spokespet just last week during the annual PALS Pet Cotillion (photos).

Next up, PALS goes to TVland for “Designing Women” Bingo on June 8.