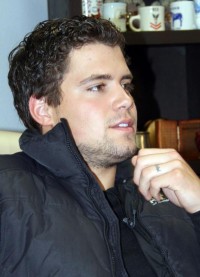 Bravo’s Andy Cohen is on a covert mission to give us more flesh. He put the idea to pose nude into the pretty little head of Levi Johnston (photos), the cute, dimwitted father of Sarah Palin’s grandchild.

Cohen threw out the idea during a video interview with a camo-clad Johnston on Bravo’s dishy “Watch What Happens Live” late-night talk show.

With all the drool dripping down his chin and onto Johnston’s monitor during the show, it’s a wonder Cohen made any coherent remarks at all. Guess it pays to be a bigtime gay Bravo exec and green-light your own show, however uncomfortable you make guests and viewers feel on a regular basis.

Nevertheless, Cohen must have struck a chord. Johnston’s bare necessities will be in full view in an upcoming issue of Playgirl, his lawyer Rex Butler told the Associated Press.

“We told him he would have to do what actors and actresses do. They get in the gym,” Butler said. “He got in the gym.”

Johnston has been working out with Marvin Jones, a former Mr. Alaska competitor and the brother of Tank Jones. The trainer has put Johnston on a low-carb, high-protein diet.

After a month of rigorous workouts, Johnston is showing impressive results, Marvin Jones said. But Johnston had a head start as a former high school hockey player.

“It’s kind of scary, he has so much energy. He’s working out before ?we work out,” the trainer said. “When it’s time for him to bare all, I think he’ll be ready.” 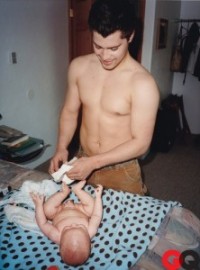 Gays rejoice. Johnston already doffed his shirt for GQ with the light of Palin’s eye (bottom photo), so we guess it’s not a leap for Beavis to just take off the pants, too.

The 19-year-old duffus with the hot bod is supposedly capitalizing on his baby granny’s 15 minutes with this play for his own exposure, so to speak, in hopes of landing a reality show. Hey, it worked for Paris Hilton (“The Simple Life”) and Kim Kardashian (“Keeping Up With the Kardashians”). Maybe Johnston could call his show “Keeping Up With the Simpleton Life.”

For a look at what he’s got goin’ on — and not goin’ on — here’s his Vanity Fair photo shoot video for the article “Me & Mrs. Palin.” Stay for the end, when he and Tank talk about the Playgirl possibilities and whether Johnston’s “Johnson” is worthy.
And because you know you can’t get enough, here’s how Levi makes money without getting naked: